A large panorama painting of the view from the Thomas B. McQuesten High Level Bridge in Hamilton by E. Robert Ross is hung prominently in McMaster University’s David Braley Health Sciences Centre (DBHSC) . 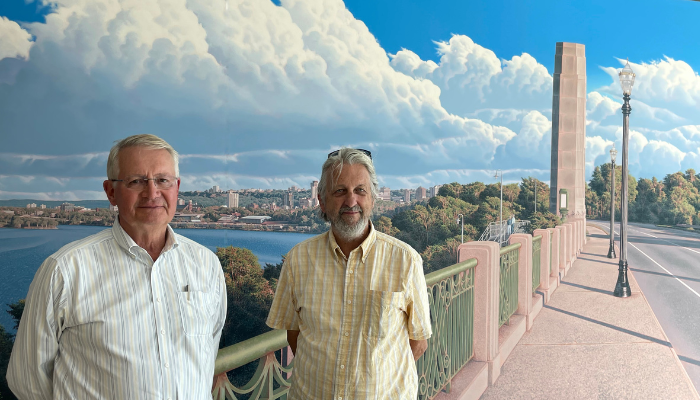 John Kelton and artist E. Robert Ross stand in front of the painting Clouds over Hamilton, View from the High Level Bridge (McQuesten)

A tree-lined avenue opens up into a sun-splashed vista of Burlington Bay and a tiny sailboat plying its waters, framed by high-rise buildings, steel mills and billowing storm clouds in the distance.

In the foreground, the back of a couple can be seen admiring the view of Hamilton and the bay from the Thomas B. McQuesten High Level Bridge on York Boulevard. In the distance is a person on a bike. For the artist, E. Robert Ross, these tiny details are the “easter eggs” of his paintings.

The large panorama, which is a seven foot by 19.5 foot acrylic on canvas, is hung prominently in McMaster University’s David Braley Health Sciences Centre (DBHSC) on Main Street downtown. The couple in the right foreground is John Kelton and his wife Kathleen, and in the distance the character on the bicycle is E. Robert Ross himself.

The painting by the well-known local artist was commissioned by family friends John and Liz Heersink, long-time supporters of the local arts scene, and in celebration of Kelton’s time as dean and vice-president of McMaster’s Faculty of Health Sciences from 2001 to 2016.

John Heersink is a McMaster alumnus, graduating with an MBA in 1972. He has had a close relationship with McMaster, and previously, a donation with his brothers built the award-winning Jan and Mien Heersink Reading Pavilion in McMaster’s Health Sciences Library.

The painting, completed in 2018, is titled Clouds over Hamilton, View from the High Level Bridge (McQuesten).

“I am honoured that John and Liz Heersink commissioned this painting to celebrate the beauty of Hamilton. The fact that E. Robert Ross tucked in Kathleen and me enjoying the view was an unexpected delight,” said Kelton, a distinguished university professor of medicine.

Kelton is also the executive director of both the Michael G. DeGroote Initiative for Innovation in Healthcare and the new Marnix E. Heersink School of Biomedical Innovation and Entrepreneurship.

“Hamilton is a spectacular city with grit, greenery and water. The most important thing is not the characters in this painting but the people, patients and students at the DBHSC,” he said.

“The DBHSC is a very special place where learning, caring and public health happens. It is a thing of great beauty for me and I’m merely a happy observer, just like in the painting.”

John Heersink said he was happy with the artwork.

“Liz and I are very pleased to see this grand painting of a favourite Hamilton scene by a well-known city artist and in tribute to the work and contributions of Dr. John Kelton, is given such prominence in McMaster University’s landmark downtown building. We have much to celebrate here.”

Kelton added: “I think John and Liz Heersink are very special people. I happen to be acknowledged in it, but this is really about family partnerships.

“I’m very pleased with what they do for the city, many times not even realizing their impact. They are elegant, light-touch Hamiltonians.”

E. Robert Ross said the new painting is an homage to Hamilton’s heritage that includes the steel mills, the downtown skyline and the Niagara Escarpment as well as the Hamilton General Hospital and Bayfront Park.

He achieved his ultra-realistic masterpiece by paying close attention to details such as the sunlight angle and shadows underneath structures, allowing viewers to guess the time of day. A touch of rust or grit was added to buildings including the bridge, another nod to Hamilton’s industrial past.

“This painting is for everybody who wants to come in and see it,” said Ross. “That includes the people who clean the DBHSC, students and faculty coming up to the offices, others coming to all the different events here.”

Ross enjoyed doing the painting in the location where it would be hung on the second floor by the main stairs, and while he worked students, staff and faculty members would often stop by to chat about his work.

“It’s not about me, it’s about people seeing the creation and I love doing public art,” said Ross.

For Ross, it was also a personal tribute to world-class McMaster doctors who have helped his family. He said his children were born at the McMaster Children’s Hospital, assisted by specialists from the midwifery program.

“John Kelton is one of Hamilton’s top physicians and happily there are so many like him in Hamilton,” said Ross. “The treasures we have here are amazing.”