McMaster obstetrician who led reform in the birthing room, dies at 97

The McMaster University obstetrician who won the Order of Canada for his advocacy of family-centred maternity care, died June 6. Murray Enkin was 97. 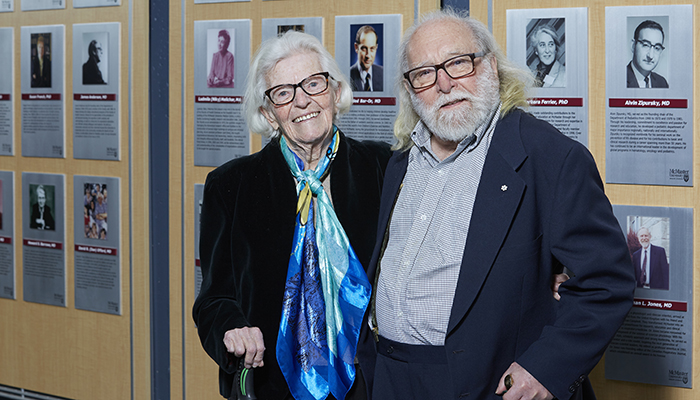 Eleanor and Murray Enkin at the annual Enkin Lectureship in 2017

The McMaster University obstetrician who won the Order of Canada for his advocacy of family-centred maternity care, died June 6. Murray Enkin was 97.

The world has lost an elegant voice, said friend and colleague Karyn Kaufman, founding director of McMaster’s Midwifery Education Program, which Enkin helped her establish in 1993.

“Dr. Enkin was an exemplar, always pleasant and a diplomat who nonetheless made his views known. He was persuasive and could laugh at himself. He, his wife Eleanor, and their family were just very generous, open people.

“His whole emphasis was on birth being not such a medical process, but as something that is an important milestone in people’s lives that you celebrate. You don’t just treat it as another medical procedure – women would come from Toronto to Hamilton to give birth under his care.”

Enkin advocated for consumers’ choices in obstetrics and for midwifery. He welcomed family to be present for mothers giving birth, contrary to practice at the time.

His conviction drove a revolution in obstetrics over several decades, including a collaboration with Sir Iain Chalmers at the National Perinatal Epidemiology Unit in Oxford, England, to research best practices in their field.

The pair thoroughly evaluated existing research about antenatal care, challenging aspects of what was then mainstream obstetric practice.  They co-edited Effectiveness and Satisfaction in Antenatal Care. And, ever the librarian, Eleanor helped the two researchers organize their findings.

Building on this experience, Enkin and Chalmers persuaded a Belgian obstetrician, Marc Keirse, to join them, and these three editors assembled a team of well over a hundred contributors to the seminal, two-volume book Effective Care in Pregnancy and Childbirth.

Drawing on the systematic reviews in those books, Enkin wrote a summary of the evidence for expectant mothers, and this paperback book went on to be sold in tens of thousands of copies.

“Murray means a lot to me, even now. He was a sort of elder brother. I was very glad that I had his attention and comradeship for more than a decade, from the late 1970s to early 1990s,” said Chalmers.

“Building on and extending our experience in pregnancy and childbirth, we helped to establish the Cochrane Collaboration, and to apply our approaches across all of health care.

But Enkin never forgot his humble philosophy: “There is no cure for birth and death, save to enjoy the interval.”

It was this philosophy that launched cartoonist Lynn Johnston’s career. The paintings Enkin encouraged her to draw for his clinic ceiling when she was his patient eventually developed into the For Better or For Worse comic strip series run by newspapers worldwide.

Enkin completed his medical training at the University of Toronto in 1947. He interned in Vancouver, worked in rural Saskatchewan, then undertook specialist training in obstetrics and gynaecology at Long Island College Hospital in the United States.

The Enkin Lectureship, celebrating humanitarianism in healthcare, was established in Murray and Eleanor’s honour in 1999 by the Department of Obstetrics and Gynecology.

Enkin was inducted into the Community of Distinction of McMaster’s Faculty of Health Sciences in 2003 and was awarded the Order of Canada in 2012.

He is survived by his four children Susan, Nomi, Jane and Randy. His wife Eleanor died in 2019.