Advancing health in Africa: Mentoring subspecialists from Uganda in Hamilton

This is part five of a six-part feature on members of the Faculty of Health Sciences advancing human health with partners in Africa. 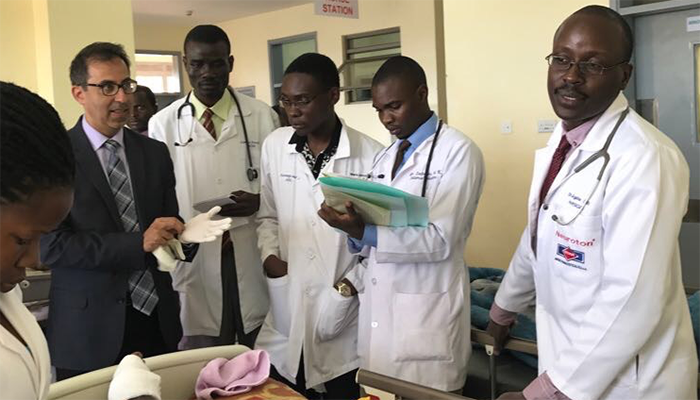 This is part five of a six-part feature on members of the Faculty of Health Sciences advancing human health with partners in Africa.

One of the challenges facing doctors in Africa is a lack of subspecialty medical education.

Hardworking physicians would like to help more patients, but are not always able to access additional training.

As a way to help fill the gap, an exchange program was created in 2000 called the St. Joseph's Health System-McMaster-Makerere International Outreach Program collaboration for Promotion of Health Care in Low Income Countries.

There are also trainees coming from Guyana in South America through an exchange partnership with the University of Guyana.

"More than 100 residents and fellows in a variety of disciplines received training at McMaster since 2000, and they have gone home to Uganda and Guyana to practise medicine, teach residents and students, and take on leadership positions in their home countries," says Rebecca Kruisselbrink, MD '08 and a clinical assistant professor of the Department of Medicine. "We have data to indicate that over 96 per cent of our graduates return and stay in their country of origin."

Kruisselbrink, who made her first trip to Uganda in 2011 says it is clear to her the health system is improving because of the collaborative exchange program.

"In the last five to six years, I have seen so much change in such a positive way," says Kruisselbrink.

"Quality improvement rounds are held regularly, paying attention what could have been done differently; physicians are challenging the status quo; patients are cared for differently. Most of all, there is an increased awareness of what is possible to achieve and physician-leaders seeking to achieve it."

Mark Crowther, MSc '98, professor and chair of the Department of Medicine, was recruited to become involved in the IOP-McMaster-Makerere initiative close to 15 years ago.

Shortly after, the physician mentored and befriended a Ugandan trainee visiting Hamilton named Henry Ddungu, who opened his eyes to the differences in health care and the need for the program.

"I had conceptually been aware of the fact that we are extremely privileged to live Canada, but it had never been hammered home until I became friends with Henry," says Crowther, noting Ddungu is now a consultant in hematology/oncology at the Uganda Cancer Institute. "Henry showed me there are enthusiastic and smart medical professionals in Uganda who are unable to get to the next level because of a lack of resources and organizational framework in their country."

Kruisselbrink has been the chair of the Subspecialty Global Health Subcommittee, McMaster University since 2013, serving as the link between McMaster's faculty members and Uganda's education and health systems.

As such, she travels to the country at least one month each year to meet with potential candidates and health officials to ensure the program is in alignment with the country's greatest subspecialty needs.

"We want to make sure we are training physicians who are going to become educators and leaders back home," says Kruisselbrink, who is also a long-time volunteer assisting with medical outreach in rural Ghana with the NGO International Needs.

Physicians accepted into the program from Uganda, as well as Guyana, come to McMaster for a period of up to one year. Generally speaking, they have already completed medical school as well as their residency program, worked for a number of years in a teaching and clinical capacity, and are looking to subspecialize.

"They are coming for full, hands-on subspecialty training because, to date, it isn't offered in a formalized capacity in Uganda," says Kruisselbrink. "If you go back a few years, there was no hematologist in Uganda. Now there are several and they have all been trained at McMaster."

Crowther, a hematologist, has since been to Uganda at least eight times and has served as a mentor to a number of visiting trainees in Hamilton.

He also became chair of the IOP in 2016, and part of his responsibilities is recruiting mentors for the collaboration with McMaster.

Many faculty members  within general internal medicine, endocrinology, infectious diseases, anesthesia, hematology, nephrology, surgery, orthopedics, obstetrics and gynecology, pediatrics, psychiatry and other disciplines including nursing have been involved in the program, either visiting onsite and providing education in the Uganda, or teaching visiting trainees in Hamilton.

Crowther notes McMaster faculty support is strong due to the positive feedback from the program.

"It's a lot of fun, but it's also inspiring because although these trainees are going back to an extremely resource-limited environment, they are very eager to learn," Crowther says. "When we train them adequately, they are going to save more lives than we could even imagine."

Paul O'Byrne, dean and vice-president of the Faculty of Health Sciences, notes the program's impact when he recalls a recent meeting he attended with senior leadership and medical school faculty at Makerere University.

"Approximately two-thirds of the people in that room had trained here at McMaster or had a connection with our university," O'Byrne says. "It was an impressive number and representative of the reach of this collaboration."

Read other articles in this series: