Lianna Genovese, founder and CEO of ImaginAble Solutions is a graduate of The Clinic @ Mac's Residency Program and Health Ventures program. 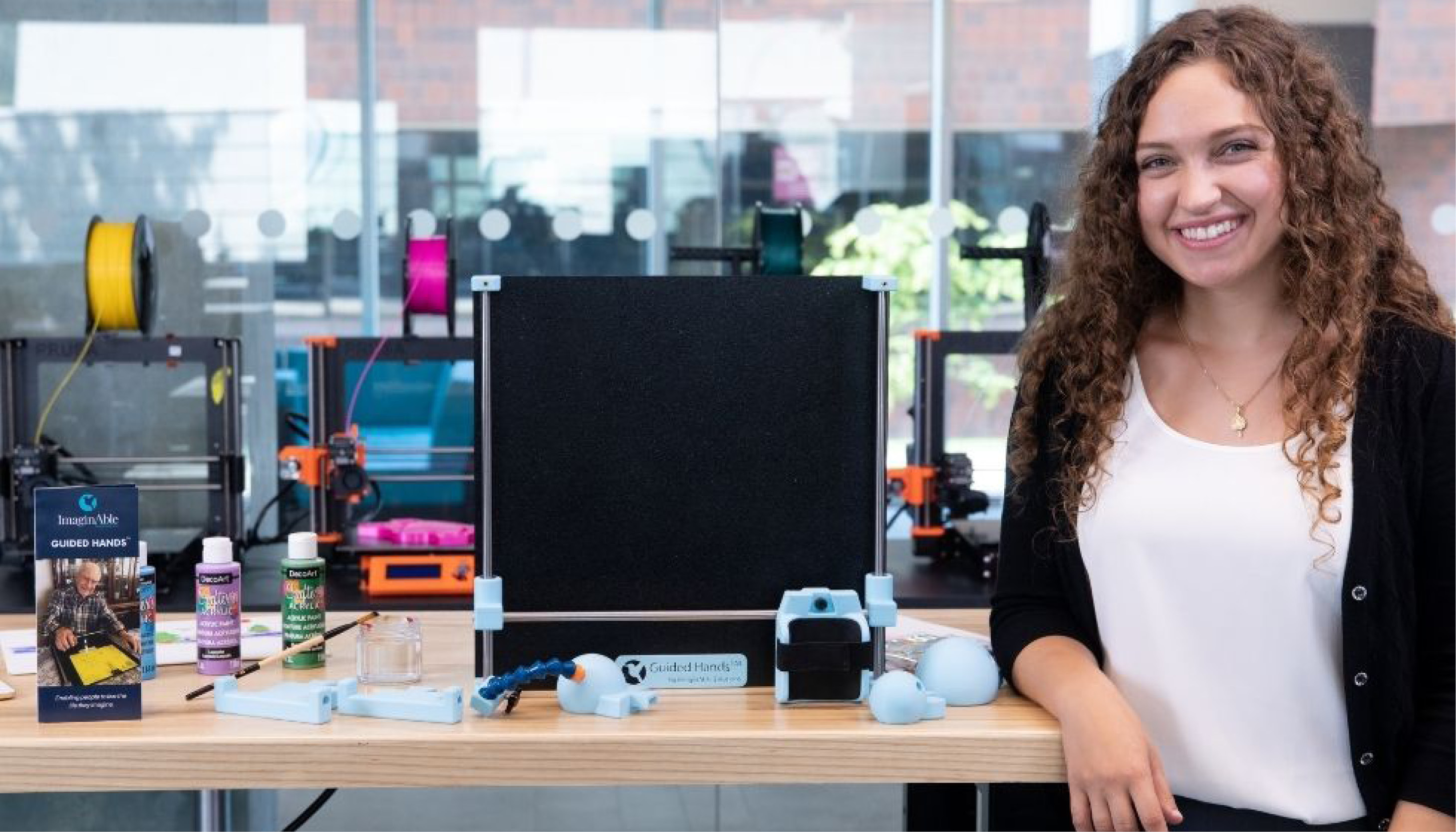 Lianna Genovese is the inventor and patent holder of Guided Hands, an award-winning device that empowers people with limited hand mobility to live richer lives.

She’s the CEO of a company, an undergraduate student in an innovative new engineering program, the Canadian winner of the prestigious James Dyson Award for design, and one of an elite short list of finalists for the international Dyson prize.

And she’s a big Rocky fan.

Genovese has a movie poster the size of a door in her basement, which is also corporate headquarters and manufacturing centre for ImaginAble Solutions, the company she founded in her third year at McMaster.

Her professors laugh when they hear about the Rocky quote, but even though Genovese is one of the most successful students in the fledgling iBioMed (Integrated Biomedical Engineering and Health Sciences) program, she does know a thing or two about taking a hit.

And, with a little help from the Faculty of Engineering’s innovative new approach to teaching and learning, she kept on moving.

The Pivot at play

Guided Hands was born out of a first-year classroom project midway through the newly launched 1P10 design course, where Genovese and her classmates met and worked to help Elissa, a woman who was losing function in her hands because of a rare form of cerebral palsy.

While other students focused on an ergonomic computer mouse or other daily-use items, Genovese’s group members looked for a way to help the avid artist paint again.

“I wanted to give Elissa back her passion,” recalls Genovese, now in her fifth and final year.

That wasn’t just Genovese’s first-year project — it was also the first year of the iBioMed program, a pilot for The Pivot, Engineering’s new approach to experiential learning. It focuses on solving real problems and working as a team, trusting and encouraging students to build on their interests.

“We’ve structured this course in a way that is very hands on, and we spend first six months giving our students all these tools. Then when it comes to their last project, we let the reins free,” says iBioMed associate director Colin McDonald, who taught Genovese’s 1P10 class with engineering professor Kathryn Grandfield.

McDonald encouraged the students to get to know the person whose problem they’d work on and trusted them to choose how best to solve it.

“By the beginning of the project, they’ve already met a range of learning outcomes,” McDonald says. “Now we want them to take those tools and tackle a real problem and do it in a way that is meaningful to the client and the student.”

Long before they upgraded to better materials, Genovese and her team’s first, on-the-spot prototype was made of pipe cleaners, straws and a sponge.

“It looked like garbage, but I said, ‘Just trust me, I have the vision,’” she recalls.

Trusting students to chart their own course is a key aspect of the Pivot. And any time a McMaster mentor has placed their trust in Genovese, it has paid off.

When she got a job at the McMaster Manufacturing Research Institute after her second year, her supervisor, Steven Remilli, encouraged her to keep working on the device while she was there.

“He saw my talent and gave me the opportunity to really do this,” she says. “He believed in me.”

At MMRI, Genovese had access to 3D printers, machinery and experienced engineers to talk over any questions she had.

“I redesigned the device, manufactured and invented Guided Hands. It had been a painting assistive device, now it was for anyone with limited hand mobility to write, draw or access touchscreen tech.”

Genovese needed to meet with people at rehab clinics, retirement homes, nursing homes and hospitals to test her device.

Again, Remilli encouraged her, and she would often board a bus in the middle of a work day to cross the city with her massive device wrapped in a black garbage bag.

“He trusted me not to play hooky and trusted that I was actually going to those places,” she says. “I ended up testing it with more than 150 people.”

When she was trying to decide whether to run her own business or pursue a co-op placement, Genovese talked to another mentor from Engineering: iBioMed co-director Greg Wohl.

“A co-op is an excellent opportunity, of course, but there’s no ‘one size fits all’ approach here,” says Wohl, who says he asked Genovese to think hard about what she might get out of a co-op, and to trust herself to make a success of her enterprise.

And a success it is.

This year, after the pandemic slowed testing, Genovese had planned to wait until she was done her degree to start producing Guided Hands for sale. But summer health-care pilots in Canada and the U.S. were so successful, ImaginAble Solutions ended up offering it for sale in August.

“We had 900 people visit our brand-new site on its first day,” Genovese says. It didn’t hurt that it was the same day she was announced as winner of the Canadian James Dyson Award for Guided Hands.

“It was amazing. People shared their stories with me, and it really made me realize why I’m doing this.”

It also made her realize the impact Guided Hands can have.

“A lot of people need it right now. And if we have the technology, we should get it to them,” she says.

While she does trust her instincts and her ability to rebound from setbacks, Genovese has taken her share of hits — as an inventor and in business.

Being a young, female student entrepreneur means having to work three times as hard for credibility, she says. It means having people patronize you and sometimes refuse to take you seriously. It means juggling midterms and business meetings and multiple conflicting deadlines.

“Most days I am so overwhelmed and stressed out,” she says. “What keeps me and my team going are the smiles on customer’s faces and their reactions when they use Guided Hands.”

Empathy and that sense of genuine satisfaction are the key to making an impact, she insists. In fact, she is emphatic about empathy to the team that works for her — including McMaster students.

Genovese works with engineering students, giving them hands-on experience in mechanical design, entrepreneurship, market research and consumer discovery, as well as taking them to meetings with real patients, health professionals and customers.

She also has a few graduate students from the Biomedical Discovery and Commercialization program working for her. They’re all older than her, she notes.

And they all learn a lot from her, says engineering professor Anna Korol, who has gone from being a professional acquaintance to becoming a close mentor to Genovese.

While she originally wanted her students to work with ImaginAble Solutions because of the impressive technology Genovese created, “after two years of working together, I’m not just invested in the technology, I’m fully invested in Lianna as an innovator and entrepreneur. She’s a confident leader, a great decision-maker, and has a ‘let’s do this’ mentality,” Korol says.

“My students working with Lianna have seen first-hand what it takes to bring an idea to life. It’s not easy and there are many bumps in the road, but what an absolutely beautiful education you get.”

Genovese is not technically done with that formal education, but she knows what she wants to do once she graduates.

“I made my family drive to Philadelphia to take my picture at the steps with the Rocky statue.,” she says. “When I graduate, I’m going to run up there with my plaque.”