Lianna Genovese, a graduate of The Clinic @ Mac's Residency Program and Health Ventures program, has received the National James Dyson Award for her invention, Guided Hands™. The award recognizes an engineering student who has created an effective solution to a problem with design thinking at the forefront. 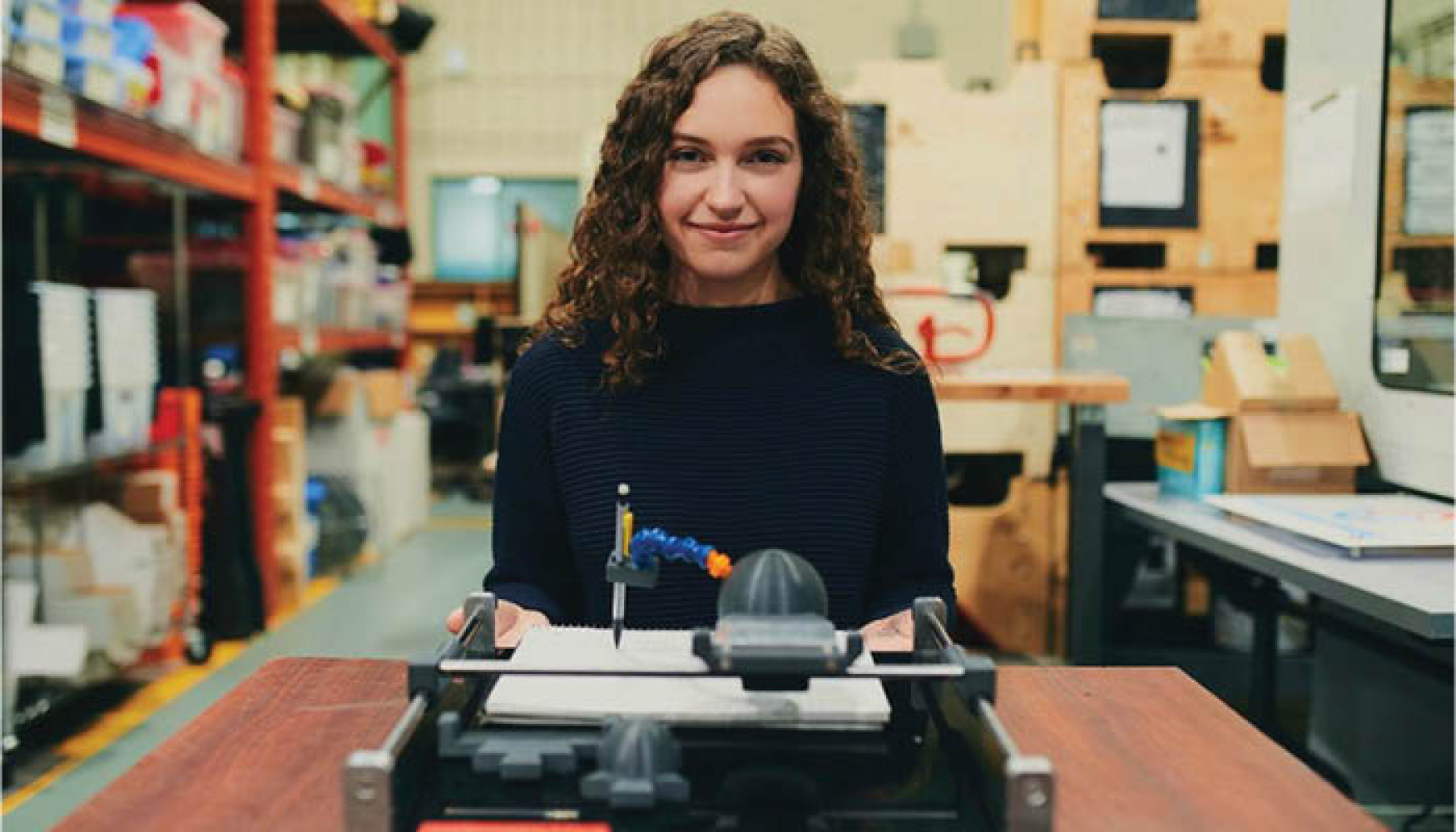 Lianna Genovese is a graduate of The Clinic @ Mac's Residency Program and Health Ventures program.

Biomedical and mechanical engineering student Lianna Genovese has received the National James Dyson Award for her invention, Guided Hands™, which she created in her first-year design course to help people with limited hand mobility write, paint, draw and access technology.

The award recognizes an engineering student who has created an effective solution to a problem with design thinking at the forefront. It seeks to celebrate and inspire the next generation of engineers.

Genovese, now in her final year at McMaster, says she was inspired to create something that supported people with limited hand mobility after a personal encounter. “I met a woman named Elissa who lives with cerebral palsy, and after hearing her story about losing her ability to paint – a talent and passion she had lost due to the progression of her condition – I knew I had to find a solution,” she says.

“I wanted to help give her back her passion and contribute to a better quality of life.”

Genovese channeled her natural entrepreneur spirit and engineering knowledge to develop Guided Hands™: a mechanical assistive device that enables anyone living with limited hand mobility to write, paint, draw and use a touch-screen device.

Inspired by the mechanics of a 3D printer, Guided Hands™ uses a simple sliding system composed of linear shafts and ball bearings. The unique system promotes controlled and guided hand movements in all directions as the user holds a handpiece custom to the size of their hand and level of hand impairment. 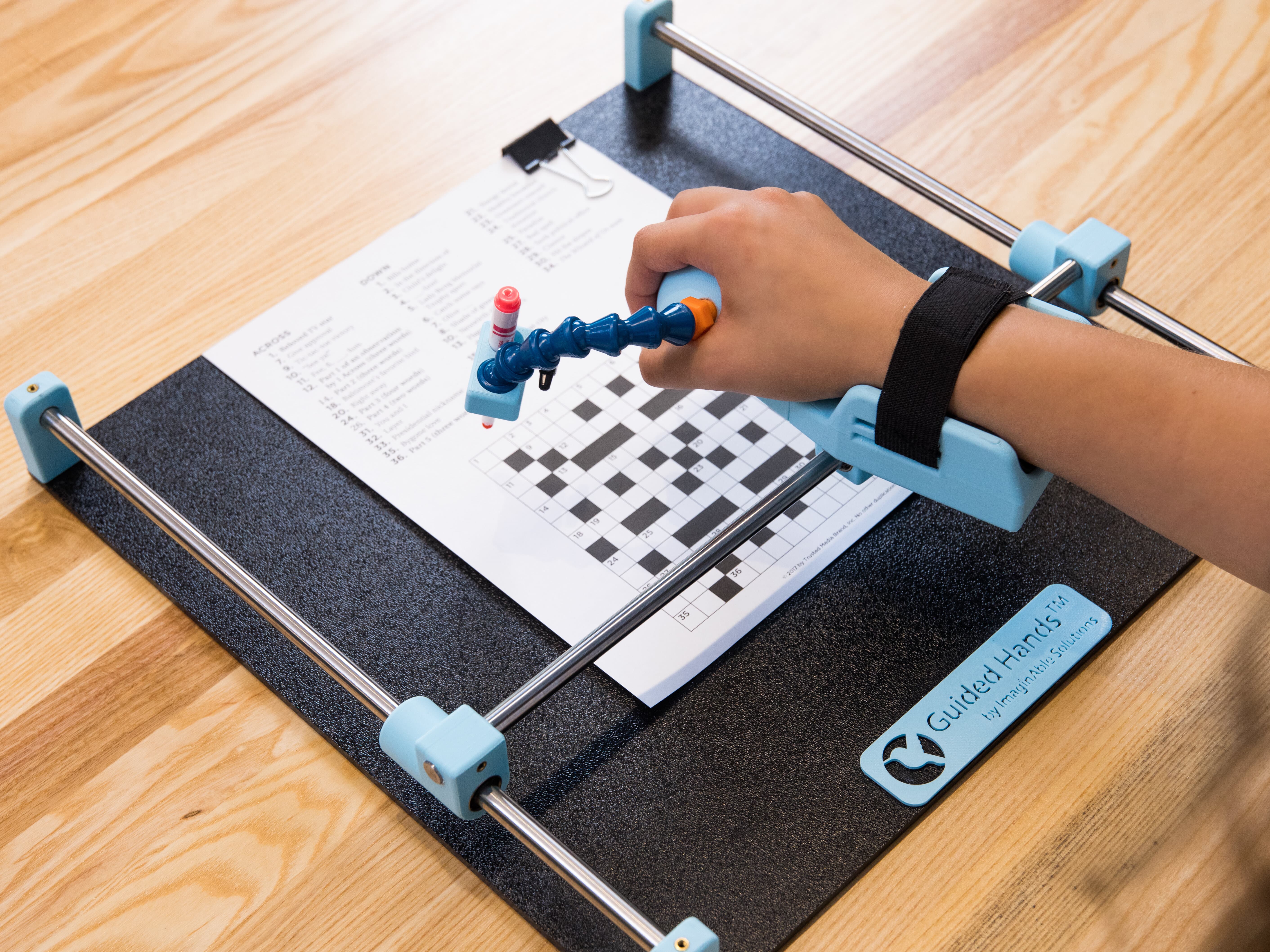 The handpiece is connected to an arm attachment that holds writing utensils, like a pen or paintbrush, and uses the patient’s gross motor skills in their shoulder to perform activities rather than relying on fine motor skills in the hand, which are often compromised.

The first prototypes of Guided Hands™ consisted of pipe cleaners, straws and a sponge. Genovese immediately had Elissa test the prototype and provide feedback to inspire many iterations.

Over the past two years, Lianna has connected with over 150 patients of varying medical conditions, neurologists, and occupational therapists across Canada to help inform her design and perfect the device.

“It was important to me to test Guided Hands™ in real world scenarios and get in person feedback. After meeting with a little girl named Bella, a child with cerebral palsy, and witnessing the smile on her face as she wrote, coloured, drew and played games on an iPad, I knew I had found my passion,” Genovese says.

“I realized that what started off as a school project could become a real-world solution that could help change the lives of many people.”

Existing devices to assist with fine motor skills do not support controlled and guided hand movements, focusing instead on only allowing the user to hold a writing utensil or reduce tremors. The Guided Hands™ design is the only product that offers multiple ambidextrous handpieces and uses a unique sliding system to glide the hand seamlessly during an activity.

Genovese is now CEO & Founder of her own company, ImaginAble Solutions, and has launched healthcare pilots for Guided Hands™ across North America for further testing with patients and health professionals.

Her company will be launching Guided Hands into the market in late August 2021, making the device available to people across Canada and the U.S.

Genovese also recently received the Innovation Award at the 2021 Global Student Entrepreneur Awards and the U21 RISE Award for innovation.