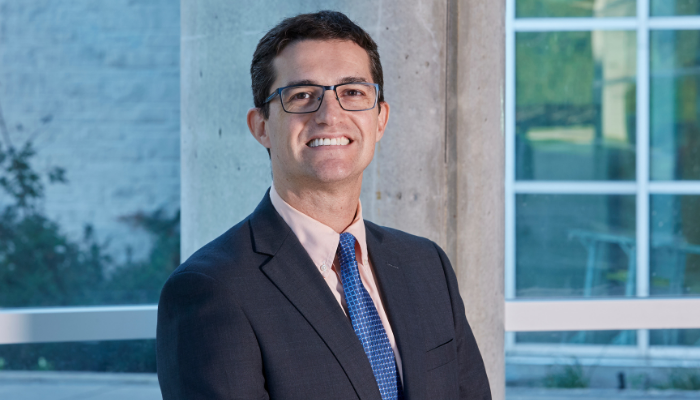 Within a decade, McMaster University’s Centre for Clinical Neurosciences will be a well-connected centre for multi-disciplinary clinical neurosciences, says its new director.

McMaster researcher Benicio Frey, professor of the Department of Psychiatry and Behavioural Neurosciences, is director of the new Centre for Clinical Neurosciences (CCN) launched Nov. 9 after several years of development.

The CCN is a partnership of McMaster and The Research Institute of St. Joe’s Hamilton. It recently signed a memorandum of understanding with the Pasteur Institute in Paris to create a partnership and potentially establish a Pasteur International Unit in Hamilton.

The CCN’s research hub is already growing, due to the relocation of the Canadian Biomarker Integration Network in Depression (CAN-BIND) from Toronto to Hamilton, where it will be housed within the CCN. Frey described CAN-BIND as one of the world’s largest biomarker research networks that specializes in depression research.

“CAN-BIND spent 10 years identifying various biomarkers that predict the treatment response to depression. Its next step is developing a platform to support biomarker-based clinical trials, to test the clinical effectiveness of these biomarkers,” said Frey.

“If successful, this can truly revolutionize how we treat depression by matching the person with the right treatment.”

Frey said CAN-BIND’s move will allow new research and partnership opportunities for students and faculty members, as well as commercialization and fundraising.

It will also enhance the CCN’s reputation as a ‘bench to bedside’, translational research centre whose research directly improves patients’ outcomes.

Frey said CCN researchers have pinpointed a neurological protein called MANF, which promotes cellular resilience and is lower in patients in the acutely depressive phase of bipolar disorder.

Having discovered that traditional lithium treatment promotes the production of MANF, Frey said CCN researchers are aiming to “cut out the middleman,” by testing a nasally administered MANF therapy on rat models.

Frey and his CCN colleagues are also investigating the mechanisms behind traumatic life events, which together with genetics are major risk factors for development of psychiatric disorders.

“My motivation is my patients and, unfortunately, psychiatric and developmental conditions are pervasive in their lives, causing them great loss in terms of their personal relationships, careers, financial stability and educational achievement,” said Frey.

“My message for people living with these conditions is that there is a tremendous amount of work being done to develop effective strategies and treatments to ultimately assist you with functional recovery, that is to live a normal life.”

Frey obtained his medical degree from the Federal University of Health Sciences of Porto Alegre in Brazil. He joined McMaster in 2008 as a postdoctoral clinical fellow of the Women’s Health Concerns Clinic of the Department of Psychiatry and Behavioural Neurosciences.

Frey has won numerous awards for his research, his most recent being the 2022 Utting Medal from the Douglas Utting Foundation for his research on depression-related biomarkers.