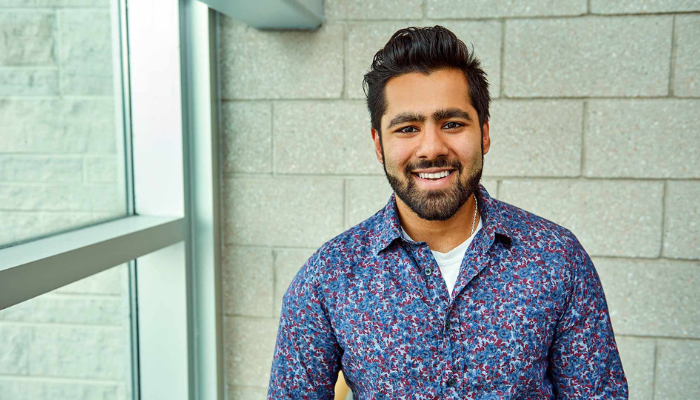 From Toronto, he began at McMaster as a Bachelor of Health Sciences student in 2014, graduating with distinction in 2018, the year he entered the undergraduate medical education program. He spent a year from 2021 to 2022 as a medical resident in the Department of Psychiatry and Behavioural Neurosciences and was to start as a resident in the Department of Family Medicine at the time of his death.

He is remembered as a leader, huge sports fan, problem-solver and for being warm and committed to helping others.

He leaves his parents Jagadananda (Ron) and Leena Choudhuri, and his dog Cudi.

His McMaster colleagues as fellow students, faculty members and administrators have talked about his distinct influence on themselves and others.

“I met Satyam on the BHSc’s annual canoe trip. I distinctly remember his warmth, exuberance, and care for people, many of whom he was meeting for the first time. He was the spark for bringing together a new community of shy students. As a teaching assistant, Satyam’s creativity and love for problem solving would shine, among his many other talents. Each time I met him, I would learn how about he was challenging himself in new and interesting ways, harnessing the natural leadership abilities which are immediately recognizable. His loss is devastating, not just for me and so many other individuals, but for the communities he so meaningfully impacted along his journey.” Matthew Jessome, BHSc, MD, Rheumatology, PGY-5

"I knew Satyam when he was a psychiatry resident. He contacted me to discuss a possible switch to family medicine, knowing that I myself had gone from a family medicine residency to a psychiatry residency. In our discussions, I was very impressed by his commitment to helping people in general, and his love of working with people throughout the lifespan. He would have been a great family doctor.” Jon Davine, MD, associate clinical professor, Department of Psychiatry and Behavioural Sciences

“There was a distinct brightness that Satyam would bring to any room he entered or social event he attended. He was so down-to-earth, friendly, kind, thoughtful and fun. I will always be grateful for the time we spent together. He will forever be a treasured colleague and friend, and we miss him greatly.” Anton P. Alaga, MD, Psychiatry PGY-2

“The BHSc (Hons) Program is full of exceptional students, but even among that group Satyam stood out for his warmth, leadership, intellectual curiosity, and care for others – traits that made him so ideally suited for the medical profession. He was beloved by so many friends in the BHSc community and it’s easy to see why – he had a delightful smile that he shared generously, and his open, friendly demeanour was so genuine that it was impossible not to like him. I know that many have been inspired by his example. He leaves a legacy of care, insight, and humility to everyone who was lucky enough to know him.” Stacey Ritz, PhD, assistant dean, Bachelor of Health Sciences (Honours) Program

“Satyam was a cherished member of the Psychiatry Residency Program. Both of us got to know him during his time as a McMaster medical student and enjoyed working with him over the course of his PGY1 year and seeing what a caring physician he was. His warmth, kindness, enthusiasm, thoughtfulness, openness, and advocacy for patients were deeply appreciated by his fellow resident colleagues and faculty alike. He will be greatly missed.” Vanessa Lentz, MD, program director, psychiatry, and Natasha Snelgrove, MD, associate program director, psychiatry

“It is rare that a student such as Satyam touches so many with his kindness, humility and deep compassion. I had the privilege of knowing Satyam first as a medical student who was so dedicated to our Student Affairs' Wellness events and later as a resident who rotated through Adolescent Medicine. I can tell you that the teen patients and parents felt his genuineness and responded in kind.” Christina Grant, MD, professor, pediatrics and student affairs director, Undergraduate Medical Education program (UGME)

“I had the pleasure of getting to know and working with Satyam, albeit only briefly, during his elective in Family Medicine at Stonechurch Family Health Centre. He was so very kind and respectful to every member of the team, and so willing to assist and learn through every patient encounter. I will always remember his empathy, keen intellect and sense of humour, despite only having known him for such a short time.” Katalin Ivanyi, MD, family physician, Stonechurch Family Health Centre

“Satyam had a wonderful soul.  Being near him, one sensed his aura, and the warmth, enthusiasm, energy, and compassion that emanated from him. He brought joy to those around him. He was a stalwart supporter of Wellbeing and Student Affairs Activities, and it is in this interface, that I was privileged to know him, and to interact with him.

He was wonderful, interesting, and complex, a natural teacher, a person one felt privileged to know. He has touched many, influenced many, loved many, taught many, supported many, role modelled for many, advocated for many, and filled the lives of many. He will be missed by many. Natasja Menezes, MD, chair, Student Affairs, UGME

“Satyam had the unique ability to make everyone in a room feel special, heard, included and cared for. His compassion for his peers and those underserved by the health system was palpable; his legacy will live on in the passion he lit among all those who had the honour of knowing him.” Stacey Marjerrison, MD, pediatric hematologist/oncologist and student advisor, UGME

“Satyam and I were in a number of performances together over the years, but not all of them went so well. We rehearsed so much for our scene for Harley’s Theatre for Development course. During the performance, something glitched with our audio, and it played an obnoxious loud sound on loop. It was like metal clanging against a chainsaw. We stared at each other with pure panic. Two seconds later, without saying anything, we skipped a third of the script, and half-shouted the rest of our lines over the noise. It was not how we envisioned that scene to go, but man it was pretty funny – once we got over it.” Daniela Kovacevic, BHSc (class of 2017)

“The McMaster medical community is deeply saddened by the loss of Dr. Satyam Choudhuri. Satyam touched the lives of many with whom he worked with his passion for medicine, his advocacy for the community and his kindness and generosity of spirit. He left a positive lasting impression on who knew him, worked with him, and learned from him. Satyam was one of our McMaster PGME residents, and with that he will always be part of our community.” Parveen Wasi, MD, associate dean, Post Graduate Medical Education program (PGME)

“When I think of Satyam, what I will remember most was his warmth, infectious smile, and hard-working nature. Satyam and I met several times throughout his medical school journey, primarily working together to prepare his residency applications and for his interviews. After matching to his first-choice, Satyam shared an interview preparation tool he created for his own interviews, which we made available for all McMaster medical students to adapt for their own preparations. This is one small example of Satyam's kindness and generosity.” Claire P. Rivlin, academic skills and career counselor, UGME

“Satyam was a loved and valued member of the PARO team. He was a fierce advocate for his fellow residents and was passionate about fostering a sense of community amongst residents. He loved sports and physical activity and had been working to organize intramural sports teams to create bonds amongst one another. His contributions have also improved the working conditions of residents, particularly at St. Joseph’s Healthcare Hamilton, where he collaborated with healthcare leaders to improve the daily working lives of his colleagues. He has helped to foster a sense of belonging not only amongst our team of PARO General Council members, but for the whole of the McMaster resident community. He was also a fierce advocate for those most marginalized in our community and committed to working to reduce inequities in his clinical work. He lived true to his values and believed deeply in justice and fair treatment of those who live with psychiatric illness. Within his residency program, Satyam was always prepared to support anyone who needed him, be it a co-resident or a patient. He could be counted on to show up to resident events with his infectious enthusiasm and made everyone around him feel like an old friend. We are grateful to have known and worked with him - he is truly missed.” Colleagues of the Professional Association of Residents of Ontario (PARO): Brendan Lew, MD, PARO President, PGY-5 Public Health & Preventive Medicine; Sonja Wakeling, PARO Board of Directors (BOD), PGY-4 Emergency Medicine; Zainab Mohamed, PARO BOD, PGY-5 Psychiatry

Satyam was particularly interested in mental health, and open about his own journey with anxiety and depression. He was interviewed on the subject in this podcast with Jordan Boroditsky in 2021.