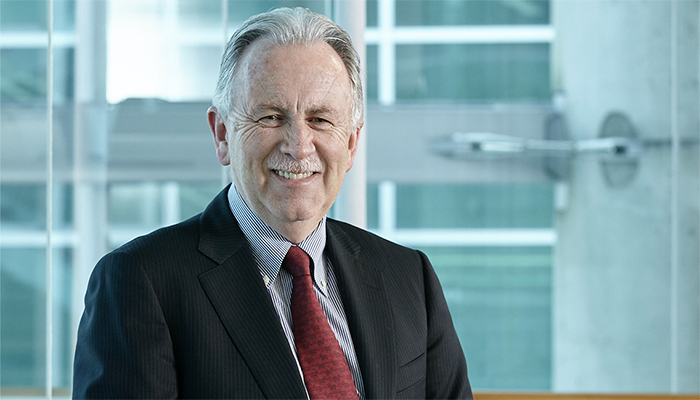 “Having the opportunity to continue to lead the Faculty is a true honour,” said O’Byrne. “Health Sciences has an outstanding team of faculty and staff who are ambitious and dedicated to their work and who give me tremendous optimism about the potential we have to become an even stronger global leader in research, teaching, training and impact.”

O’Byrne has served as dean and VP since 2016.  In making its reappointment recommendation the selection committee made special note of his vision for the Faculty, including his focus on fiscal sustainability, equity, diversity and inclusion, and Indigenous health. The re-appointment, which takes effect July 1st, has been approved by the Senate and the Board of Governors.

“Paul is an inspiring leader,” said president David Farrar. “New projects like Canada’s Global Nexus for Pandemics and Biological Threats represent the very best of McMaster’s ability to work across disciplines and to build on its world class research. Such bold undertakings are only possible with the vision and focus that a leader like Paul provides.”

Over the past five years, the Faculty of Health Sciences has paid special attention to the development of its Indigenous Health Initiative.  O’Byrne says being able to see this and other diversity and inclusion work through to their next stages will be an important part of his second term along with innovation and commercialization in research, international student recruitment, building on the strengths of the Global Health Office, expanding hospital, industry and other partnerships and demonstrating McMaster’s impact to donors, government and the Hamilton community.

“The Faculty is now ranked number 11 in the world,” he said. “But we have even greater ambition and we are fortunate to have the people who can make that happen.”

O’Byrne received his medical training at University College, Dublin. He arrived at McMaster as a resident in internal medicine and respirology in 1977 and joined the faculty in 1984. His research focus is the mechanisms and treatment of asthma, particularly the role of environmental allergens. He has authored almost 500  peer-reviewed articles in high-impact journals, and he is a frequent lecturer at international meetings.

O’Byrne has served as the executive director of the Firestone Institute for Respiratory Health based at St. Joseph’s Healthcare Hamilton and Chair of the Department of Medicine at McMaster.  He is a named Fellow at several international Colleges of Physicians, was elected to the Royal Society of Canada in 2010 and the Canadian Academy of Health Sciences in 2015, the same year he received McMaster’s top academic award, being named a Distinguished University Professor. In 2018 he was presented with the Honorary Life Achievement Award from the Ontario Thoracic Society, in 2020 received McMaster’s Jack Hirsh Award for Outstanding Academic Achievement and in 2021the Distinguished Graduate Award from University College, Dublin.