Passion, skill, and a trademark outside-the-box approach to thinking fuels Dave Callen's reputation as a visionary resident-educator. This summer, his work was recognized with the 2021 Department of Pediatrics Education Innovation Award. 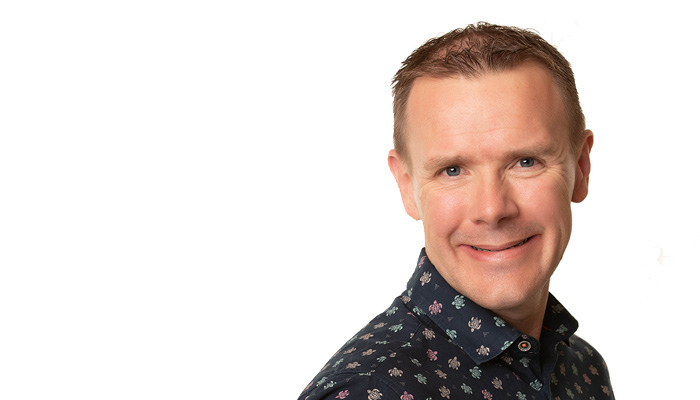 Passion, skill, and a trademark outside-the-box approach to thinking fuels Dave Callen's reputation as a visionary resident-educator. This summer, his work was recognized with the 2021 Department of Pediatrics Education Innovation Award.

Callen, an associate professor of pediatrics and director of the Pediatric Neurology Residency Program at McMaster, has been collecting education awards for over a decade. Although perhaps the strongest indicator of the Callen-effect is that under his guidance, McMaster pediatric neurology residents have been consistently at the top of national rankings and graduating residents have had an impressively high success rate on Royal College exams.

“Dr. Callen is always willing to learn and help the residency program evolve through his efforts…it is rare to find a director who is so open and flexible to change,” says, Dr. Mandeep Sidhu, a pediatric neurologist at the Greater Niagara General Hospital, and one of Callen’s former students.

Widely acknowledged for his refusal to accept the status quo, and deeply invested in the success of his trainees, Callen’s contributions to education innovation are numerous.

In 2008, Callen became McMaster’s inaugural program director, and in designing a five-year curriculum, he chose to deviate from standard practice by instating a mandatory neurophysiology and neuroanatomy rotation for second-year pediatric residents. Although this had never been implemented by other programs, Callen believed that developing fluency with this material early on would pay dividends through the remainder of students’ neurology training. He also embraced a “flipped-classroom” approach to problem-based learning and, based on the suggestion of graduates, he introduced community pediatric neurology rotations to support careers in community practice.

In 2013, Callen and colleagues from the University of Ottawa launched a national in-training examination – something that never existed for pediatric neurology trainees in Canada before. This pediatric-specific examination called, NITECaP (National In-Training Examination for Canadian Pediatric Neurology Residents) has since been adopted by all Canadian pediatric neurology programs. The initiative was critically studied and data demonstrating its uptake and validity was shared at an international conference in the spring of 2018.

Acknowledged for his commitment to residents’ career success, Callen introduced mandatory leadership and management training for chief residents and initiated the Canadian Pediatric Neurology workforce that provided data on projected numbers of academic and community jobs available to new graduates.

“The department’s education advisory committee had the difficult task of selecting from amongst many outstanding nominees, but it gives us great pleasure to recognize Dave with this award and thank him for his commitment to medical education,” said Ereny Bassilious, associate chair of education in the Department of Pediatrics.

On the heels of the announcement, Callen was inundated with congratulatory messages from faculty and staff.

“I can’t think of a more worthy recipient!” said, Margaret Nowacyk, professor of medicine and associate member of pediatrics.

The Department of Pediatrics Education Innovation Award (DPEIA) is a biennial award that recognizes a faculty member who develops and uses innovative teaching and/or evaluation methods; effectively uses strategies at a local, national, or international level to increase content in the curriculum; or conducts an innovative and/or influential research project related to education.