Faculty members who are directors of research centres and institutes or hold endowed chairs supported by DeGroote and his family pay tribute to Michael G. DeGroote. 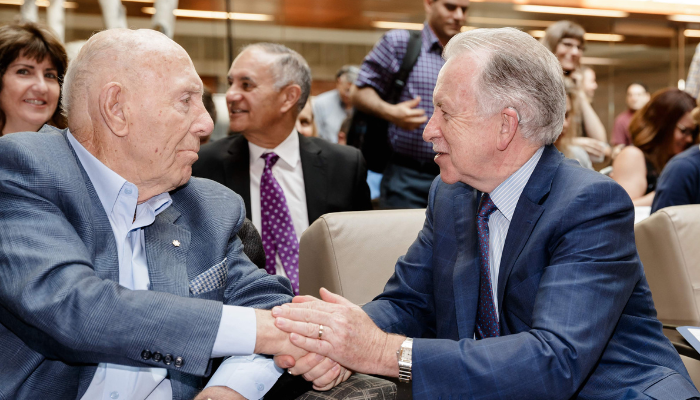 The enormous impact of Michael G. DeGroote on McMaster University and specifically on its Faculty of Health Sciences and medical school will reverberate for generations, says Paul O’Byrne, dean and vice-president of the Faculty.

DeGroote, an entrepreneur and philanthropist whose support for McMaster included more than $155 million to the Faculty over the past two decades, died Sept. 12 at age 89.

“Michael DeGroote’s gifts were transformational for us, significantly boosting our ability to have significant impact at the highest level nationally and internationally in a wide range of health fields,” said O’Byrne.

“His generosity and support will continue to impact our researchers, our students and their future patients for many years to come.”

At the Faculty, DeGroote and his family’s gifts are driving advances in infectious disease and antibiotic resistance, pain management, cannabis science, healthcare innovations, health management, health leadership and executive development and student support. The Michael G. DeGroote School of Medicine was named in his honour in 2004.

John Kelton is executive director of the Michael G. DeGroote Initiative for Innovation in Healthcare and he was the dean and vice-president of the Faculty of Health Sciences when DeGroote gave his gifts for the Faculty.

Kelton said: “Mr. DeGroote was a man of few words and a remarkably incisive and analytical mind. He was a person who believed in the importance of education and all of us are so fortunate that he was supportive of McMaster and became loyal to our institution and in particular the Faculty of Health Sciences.

“Mr. DeGroote literally changed the trajectory of healthcare in Hamilton and the impact of McMaster around the world. He will be recognized as one of the two or three most important people in the history of McMaster. Few people can not only change an entire institution but change it for the better.”

Faculty members who are directors of research centres and institutes or hold endowed chairs supported by DeGroote and his family are paying tribute this week.

“Mr. DeGroote’s prescient investment 15 years ago nucleated internationally recognized excellence in the Michael G. DeGroote Institute for Infectious Disease Research when there were few centres of excellence in the field. It led the nation in response to the COVID-19 pandemic and was the springboard to McMaster’s ambitious Global Nexus for Pandemics and Biological Threats. Mr. DeGroote’s faith in our team and enthusiasm for innovation and global impact enabled this bold response.” Gerry Wright, Michael G. DeGroote Chair in Infection and Anti-Infective Research and lead for Canada’s Global Nexus for Pandemics and Biological Threats

“Mr. DeGroote has had a transformational impact on McMaster University through his vision and generosity. His gift that established the Michael G. DeGroote Institute for Infectious Disease Research (IIDR) in 2007 has made McMaster a beacon of infectious disease research excellence on the international stage. It drew me in eight years ago! The many impacts of his investment in the IIDR are too numerous to list but were so very apparent during the COVID-19 pandemic. I know that our team is committed to honouring Mr. DeGroote’s memory by continuing the legacy of excellence that he initiated here.” Matthew Miller, director, Michael G. DeGroote Institute for Infectious Disease Research

“It was because of Mr. DeGroote’s vision, enthusiasm and deep desire to advance health science that the Michael G. DeGroote Centre for Transfusion Research was able to respond to critical concerns brought on by the COVID-19 pandemic, including evaluating the use of convalescent plasma responsibly and unlocking the mechanisms of vaccine-induced blood clots. These initiatives have laid the foundation for large scale transfusion trials and cutting-edge translational science.” Donald Arnold, director, Michael G. DeGroote Centre for Transfusion Research

“Mr. DeGroote was a tireless advocate for advancing the management of pain and promoting research of novel therapeutics, including medical cannabis. His generous support of the Michael G. DeGroote Centre for Medicinal Cannabis Research has allowed McMaster University to become a world leader in research regarding the therapeutic use of cannabis and the Centre’s innovative trials, influential clinical practice guidelines, and observational studies have been used to establish government policy and promote concordance between evidence and practice.” Jason Busse, director, Michael G. DeGroote National Pain Centre; associate director, Michael G. DeGroote Centre for Medicinal Cannabis Research

“I was inspired by Mr. DeGroote’s commitment to rigorous scientific inquiry, regardless of the outcome. As a scientist, his philanthropy allowed and even encouraged you to go where the data went, whether the results were popular or not. When it comes to cannabis, there are a lot of strong opinions, but the DeGroote Centre for Medicinal Cannabis Research was founded on the principle that evidence is essential for judging whether a medicine works. The many research initiatives he supported took on timely, challenging questions of major importance, but the through-line was always prioritizing the highest scientific standards.” James MacKillop, director, Michael G. DeGroote Centre for Medicinal Cannabis Research

“I had the privilege and honour to know and take care of Mr. Michael G. DeGroote for over twenty years. He was a strong believer of excellence in care, education and research and his generous gift to McMaster has enabled us to achieve that. In particular, his gift has helped us advance knowledge and understanding in the care of patients with chronic pain.” Akbar Panju, Medard DeGroote Chair in Medicine

“Mr. DeGroote’s constant and genuine interest in human stem cell biology has created a platform for our program to be initiated in 2006 as one of the first in Canada. His vision has allowed our program to exist and produce over 100 trained physicians and scientists that will continue his legacy with applications involving stem cell therapies in cancer and regenerative medicine for decades to come.” Mick Bhatia, Michael G. DeGroote Chair in Human Stem Cell Biology and Cancer Research