Three visionary leaders, whose research and contributions furthered the reputation of McMaster University and its Faculty of Health Sciences, are being inducted into the Faculty’s Community of Distinction next month. 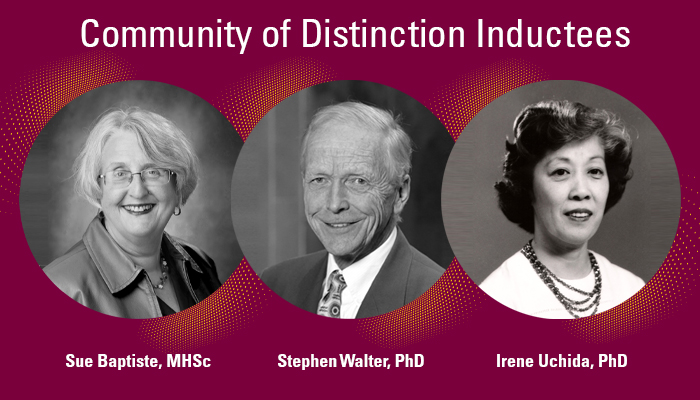 Three visionary leaders, whose research and contributions furthered the reputation of McMaster University and its Faculty of Health Sciences, are being inducted into the Faculty’s Community of Distinction next month.

This year’s inductees are Sue Baptiste, professor emerita of the School of Rehabilitation Science; the late Irene Uchida, professor of the departments of pediatrics and pathology and molecular medicine, and Stephen Walter, professor emeritus of the Department of Health Research Methods, Evidence and Impact.

The inductees will be celebrated at a special ceremony on Nov. 4 at 4 p.m. in the Ewart Angus Centre of McMaster’s Health Sciences Centre.  They are:

Sue Baptiste MHSc, is internationally known as a leader in educational innovation. This was particularly for pioneering the development of problem-based learning in her field of occupational therapy, as the benefits of the approach were considered practice-changing. She also developed initiatives supporting the integration of internationally-trained occupational therapists to Canadian practice. She joined McMaster University as a lecturer in 1985 and retired as a professor emerita of rehabilitation science in 2018. She holds the McMaster President’s Award for Excellence in Teaching, the Teaching Award from the Ontario Confederation of University Faculty Associations, and the President’s medal of the Canadian Association of Occupational Therapists.

Irene Uchida, PhD, pioneered the field of cytogenetics in Canada. Her work led to the development of a test to detect early chromosomal abnormalities. She also discovered that Down Syndrome can be passed down by both parents. Her foundational work on the effect of X-rays on chromosome behaviour during pregnancy led to them being used more cautiously on pregnant mothers worldwide. She joined McMaster University in 1969 as a professor of pediatrics and pathology and retired as a professor emerita in 1985. She died in 2013 but is remembered as an inspirational medical educator and trailblazer for women in science, and her clinical medical geneticist trainees went on to lead major genetics programs across Canada. Her awards include being one of 1,000 Canadian Women of Note in Canada’s first century.

Stephen Walter, PhD, is known as Canada’s most distinguished and internationally recognised biostatistician, as he created many practical techniques of universal use in epidemiology and his hallmark was solving real-world problems. He joined what is now the Department of Health Research Methods, Evidence, and Impact in 1982 and retired as professor emeritus in 2012. He was among the top highly cited scientists in the world, showing his influence on the work of others. He is also known for his flair for teaching and mentorship, having nurtured more than 100 graduate students. He is a Fellow of the Royal Society of Canada.

The event, being held in the lobby of the Ewart Angus Centre of the Health Sciences Centre, is open to all faculty, staff and learners of the Faculty, as well as the colleagues, family and friends of the inductees. Please RSVP by Oct. 28 at fhsevents4@mcmaster.ca or by calling 905-525-9140, ext. 27400.

More information on the Community of Distinction may be found on the Faculty’s web page: https://healthsci.mcmaster.ca/about-us/community-of-distinction