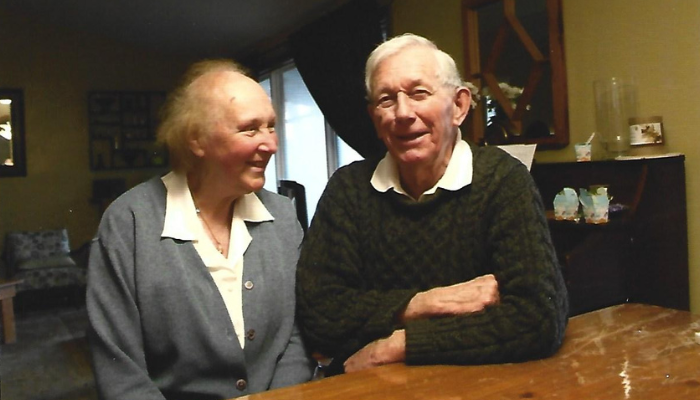 Marguerite and Geoffrey Hunt and Irene Sangster-Sheard have all become instructors at McMaster University after their deaths.

They did so by donating their bodies to McMaster’s Education Program in Anatomy, where they and others are helping teach the 2,000 health professional and biomedical engineering students who flow through the program every year.

Sangster-Sheard’s daughter Gail Slater remembers that her mother always quipped that “When I die, I’m going to university.”

“I did it all for you, Mom, because I know you wanted this for so long. You were so proud to say, ‘I’m going to university’,” the Mississauga resident said. “McMaster opened their hearts to us on the worst day of our lives. They were so compassionate.”

Sangster-Sheard had had a full life, working as a photographer in Montreal and frequenting horse shows in her younger days. She was also an avid shuffleboard player and remarried when she was 80.

She had remained active and independent until her final two weeks, when she suffered two strokes that led to her death.

Slater said her mother’s donation to the anatomy program was vital, both for medical science and teaching younger generations the value of giving back to help others learn.

“It warms my heart because we should be doing a lot more to help medical science,” said Slater. “I am so proud of my mom, it’s still hard to talk about it.”

Geoffrey and Marguerite Hunt were a love story.

The Hunts married in 1957 after Geoffrey completed his national service in the British military. They soon after emigrated to Canada, where Geoffrey worked in sales and Marguerite was a secretary.

On May 11, just one day before Marguerite died, Geoffrey asked his daughters Gillian Shortt and Justine Mills to arrange the donation of his body to McMaster, close to home in Mississauga.

Geoffrey often joked that nobody wanted his old body, but both daughters said their father enjoyed good health into his old age. He played tennis four times a week until his late seventies.

“He was such a vibrant man,” said Shortt. “We will all be following in his footsteps.”

The Hunts were both avid believers in community service, delivering Meals on Wheels until just five years ago. They also despised wasting anything, even their own bodies, leading them to keep giving back to their community, even in death.

“The fact they are now teachers at McMaster University totally changes our perspective. You want to think of your loved ones in a good place. Our parents continue to do something,” she said.

“This is not the end – it is the beginning of something amazing – and I get goosebumps. This does not happen if you put them in the ground.”

Shortt said her daughter studied anatomy and taught nursing at McMaster, underlining the necessity of her parents’ final act. This included inspecting a body to learn how pacemakers are implanted, just one example of how such donations can help teach health professional students.

Mills said this would make her parents happy, as they passionately believed in accessible education for everyone.

“The only thing missing is them,” she said.

Midwifery student Nathan McLeod said learning in anatomy gave him a chance to know the body, for example by uncovering gallstones when dissecting the gallbladder, or seeing scars from hip surgeries.

“There is a profound connection and respect when you are working with a donor,” said McLeod, a second-year student.

“We became really passionate about anatomy through the hands-on experience of these incredible donors who are now our teachers,” he said. “Their body tells their story.”

Student Madeline Damjanovic, who is starting her Masters in anatomy this month, said a body donation “really is a gift that lasts a lifetime. We are so incredibly grateful.”

Her sister Isabella, on the same course, said that “we have so much respect for what they do and what they continue to do and teach us.”

Bruce Wainman is director of McMaster’s anatomy program and a professor for the Department of Pathology and Molecular Medicine. He says anatomy schools across Canada are facing a shortfall of body donations, which were halted because of COVID-19 pandemic restrictions.

Now, however, health professional students such as those in the medical, nursing, midwifery, physician assistant, rehabilitation science, and biomedical engineering programs at McMaster are heading back to full-time in-person learning.

“If you feel you would like to contribute in a meaningful way to our future health-care providers, this is the last best thing you can do,” said Wainman.

He added that the impact of a nationwide donor shortage is less acute at McMaster, thanks to the Hamilton-area community’s generosity. The McMaster program accepts about 60 bodies a year.

A Service of Gratitude to honour individual donors was held at McMaster on Aug. 19, bringing together their loved ones and students.