Impact of architecture on health care under microscope. Lecture on Sept. 12

The relationship between architecture and health care, including research and education, is being examined in a new lecture series at McMaster University on Sept. 12 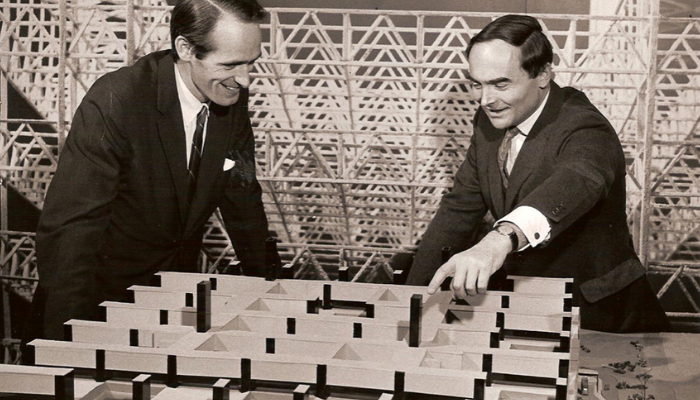 The relationship between architecture and health care, including research and education, is being examined in a new lecture series at McMaster University.

The Architecture of Health: The Annual Zeidler-Evans Lecture series is sponsored by the family of John Evans, the first dean of the university’s Michael G. DeGroote School of Medicine, to honour Eberhard Zeidler, the architect of the McMaster University Health Sciences Centre (HSC) which was built for the university’s medical school and health sciences and as a major hospital.

The first lecture on Monday, Sept. 12 at 5:30 p.m. in the Ewart Angus Centre of the HSC will look at the impact of the architectural innovation at the HSC and two other Canadian health sciences centres.

“From its inception, the new medical school at McMaster realized that pioneering approaches to education and community-centred care included ground-breaking innovation in the design and use of physical space,” said Tim Evans, one of John Evans’ six children.

Evans was hired by McMaster in 1965 to create the school, and he was considered a medical revolutionary for creating a different kind of medical school based on small group, self-directed, problem-based learning with early patient engagement. Zeidler, of Craig Zeidler Strong architectural firm, began working with Evans and the other leaders of the medical school in late 1967.

The landmark, award-winning building of 1.3 million square-feet opened in 1972.

The innovative building is unique as it was built on the McMaster campus to be both a tertiary acute-care hospital and the training and research site for physicians, nurses and other health professionals. The building has unusual flexibility. The walls throughout its four floors are easy to change as the infrastructure for the building is kept in interstitial space between the floors and in its tower-like shafts.

Understanding the need for constant change in medical science, the building was “designed never to be finished”, said Zeidler in his 1974 book about the project “Healing the Hospital: McMaster Health Sciences Centre: Its Conception and Evolution.”

Both men went on to illustrious careers. Evans was the president of the University of Toronto, the creator of the MaRS Discovery District innovation hub, chair of the Rockefeller Foundation and chair of Torstar Inc. Zeidler created some of the most iconic buildings in Canada, including Ontario Place and the Toronto Eaton Centre and Canada Place in Vancouver. Evans died in 2015, and Zeidler died in January 2022.

The first lecture will be given by Annmarie Adams, professor of McGill University, and will have a spotlight on the McMaster Health Sciences Centre and two other Canadian hospitals, the Walter C. Mackenzie Health Sciences Centre in Edmonton and SickKids Hospital in Toronto, and their links in architectural innovation.

She will also put a focus on the special relationship between Zeidler and Evans “to illustrate the distinct role of co-production”.

Adams is jointly appointed to the School of Architecture and the Department of Social Studies of Medicine at McGill. Her research focuses on the architectural history of medicine.

More information and registration for the lecture is available at Zeidler-evans.healthsci.mcmaster.ca

“Our medical school, and its McMaster Health Sciences Centre home, were created as somewhat controversial, extremely novel innovations in health care 50 years ago, but their promise of improving health and well-being through collaboration and being patient-centred has proven very successful,” said Paul O’Byrne, dean and vice-president of McMaster’s Faculty of Health Sciences.

“We thank the families of our first medical school dean John Evans and the architect Eberhard Zeidler for this opportunity to examine the role of architecture with well-being.”