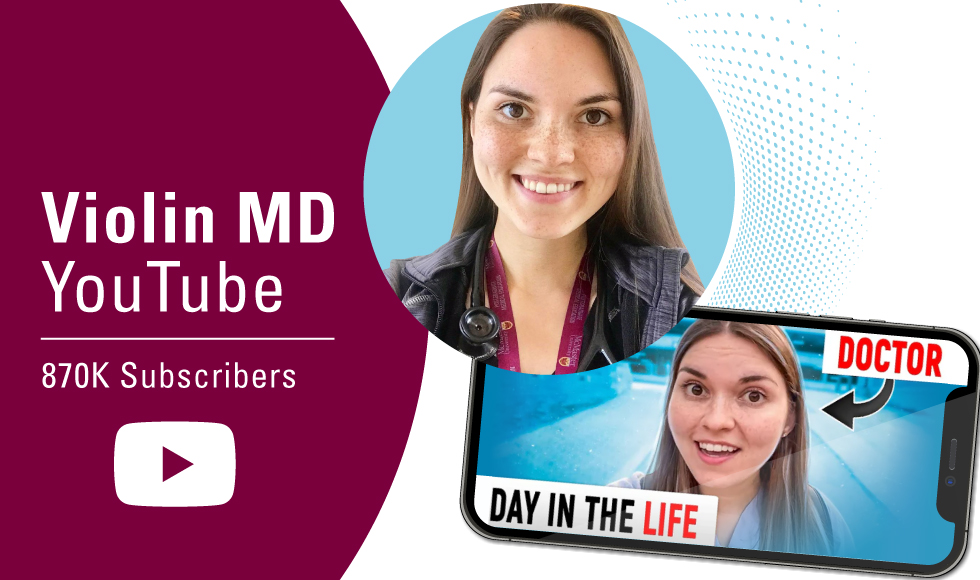 Today, Siobhan Deshauer is a McMaster University graduate as well as a YouTube superstar playing to an audience of hundreds of thousands with poise and confidence as a medical resident and vlogger.

But she credits her on-camera confidence with her childhood training as a classical violinist, reflected in her YouTube handle ‘Violin MD’ and playing her favourite instrument in her series of videos.

Deshauer’s mission is twofold: saving lives in hospitals and demystifying medicine for the masses using her creative media skills, from her YouTube videos to reporting on rising dementia cases for ABC News.

Her YouTube videos cover everything from the often-harrowing fight to save COVID-19 patients to doctors’ reactions to ‘fail videos’ showcasing hilarious but dangerous stunts that can result in severe injuries. Her efforts have earned her 870,000 YouTube subscribers and 71 million views after five years of vlogging.

“My proudest moments have been interviewing patients, hearing their reactions as their stories come to life on video, and then seeing the responses from viewers,” said Deshauer, who completed her internal medicine and rheumatology residencies at McMaster’s Michael G. DeGroote School of Medicine in June.

“What is amazing is seeing the public open up, share their own medical experiences, and start conversations in the comment section. I truly believe that information brings us together.”

Her violinist background has prepared her surprisingly well for handling medical emergencies, as remaining calm and leading a team is also what is needed to perform onstage.

She is also a natural in front of the camera, remaining composed even amid an emergency, but her videos never reveal her patients’ identities and are conducted with full permission from the hospitals where she works.

“I am starting to see a community form. I’ve heard from people saying the videos have help decrease their fear of going to see a doctor; others described a better understanding of medical problems and empathy for what people may be suffering with in their lives,” said Deshauer.

However, her skills and resilience were tested to the limit through the COVID-19 pandemic. Her first challenge was overcoming her own fear while being bombarded by often-conflicting information when the pandemic began in early 2020.

Then, she even resorted to keeping her phone in a sealed Ziploc bag and obsessively wiping down surfaces she came into contact with, as well as showering after every shift.

The following year both Deshauer and her husband Mark, also a doctor, fell sick with COVID-19 themselves. For weeks they struggled with aches, fatigue and a fast heartbeat when climbing stairs, even once the initial infection was over.

Back at the hospital, Deshauer found herself caring for sick and dying patients, describing in one video how one family was called in to say goodbye.

Deshauer handled the trauma without her usual support network of fellow residents and nurses, who in more normal times would debrief after emergencies, sharing their feelings and forging close bonds.

During the pandemic however, hospitals restricted staff from ‘clustering’ and introduced virtual debriefings, depriving doctors and nurses of in-person contact.

“Some of the hardest and most impactful moments have been showing raw emotion on camera. There were a couple of moments where I shared some really intimate feelings to the public, but I felt it was important,” said Deshauer.

“On one occasion I was doing a call shift in the COVID-19 section of the ICU, where patients were very sick. I filmed my reaction to how ill patients were, while taking off my N95 mask for the first time, showing marks all over my face.”

But Deshauer’s vlog is itself a form of self-expression and healing, as well as a platform for her to interview experts and shadow allied professionals such as nurses, social workers and pharmacists.

“Medicine really is about teamwork,” she said.

This past month, Deshauer passed her Royal College of Physicians and Surgeons of Canada rheumatology licensing exam.

She plans on doing locums both locally and in northern communities, practicing a combination of internal medicine and rheumatology – and will continue vlogging about her experiences as a new attending physician.

“I’m so excited to have more time to dedicate to filming – there will be a lot more content coming,” said Deshauer.

“This will include a video series where I shadow various allied health professionals for the day, highlighting their roles in patient care. In fact, I will be spending the day in a helicopter with the Ornge paramedics learning about their work next!”