Prone positioning, or lying face down, does not significantly reduce the risk of intubation in hospitalized patients experiencing acute hypoxemic respiratory failure from COVID-19, according to Hamilton-based researchers. 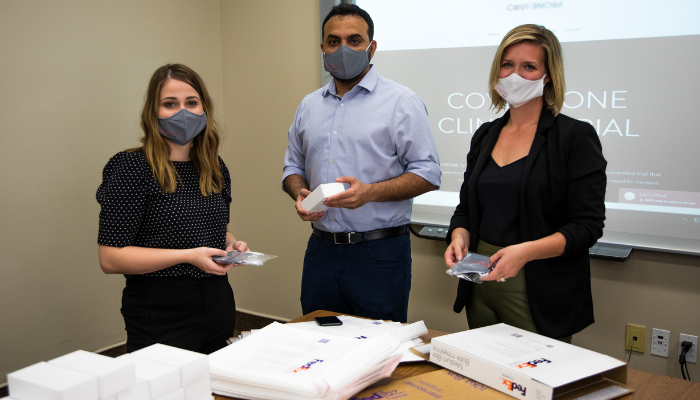 Prone positioning, or lying face down, does not significantly reduce the risk of intubation in hospitalized patients experiencing acute hypoxemic respiratory failure from COVID-19, according to Hamilton-based researchers.

However, their research study called the COVI-PRONE trial, found patients receiving high-flow oxygen may benefit from prone positioning while awake. The international, multi-centre randomized clinical trial also found that prone positioning had no significant effect on death and the length of stay in the intensive care unit or hospital.

Prone positioning (or patient proning) is a procedure that involves patients lying face down for a prescribed time. It has been used since the 1970s in patients undergoing mechanical ventilation for acute respiratory distress syndrome. Awake prone positioning refers to this procedure being performed on conscious patients who are not mechanically ventilated.

Outside of Canada, prone positioning is widely used and has been commonly used throughout the pandemic, despite lacking evidence to support its safety or efficacy.

At the beginning of the COVID-19 pandemic, prone positioning was believed to be a potentially useful intervention – one that warranted further investigation. While some studies suggested awake prone positioning was safe, there was insufficient evidence to recommend using this strategy in clinical guidelines.

“We designed COVI-PRONE to provide robust evidence, since our previous knowledge was based on low-quality evidence from observational studies,” said principal investigator Waleed Alhazzani, a professor of medicine at McMaster University and critical care physician at St. Joseph’s Healthcare Hamilton.

The COVI-PRONE trial included 21 hospitals in Canada, Saudi Arabia, Kuwait, and the United States. Researchers aimed to use prone positioning in hypoxemic COVID-19 patients for 8 to 10 hours per day, with 2 to 3 breaks, as needed. Participants in the control group were not proned and were asked not to position themselves in the prone position.

“The results of the COVI-PRONE trial enhanced our understanding about the efficacy and safety of awake prone positioning in COVID-19 patients,” added Alhazzani.

Findings from the COVI-PRONE trial were published on May 15 in JAMA. The same day, Alhazzani presented the findings at the America Thoracic Society International Conference in San Francisco.

“St. Joe’s GUIDE Group is conducting an updated systematic review and meta-analysis to evaluate the effectiveness and harms of awake prone positioning for patients with hypoxemic respiratory failure,” said Sarah Culgin, study co-author and research manager at The Research Institute of St. Joe’s Hamilton. “Including more recent evidence, such as COVI-PRONE, may impact the overall picture of the effect of proning this patient population.”

Prone positioning can be a labour-intensive procedure, as it requires physically maneuvering patients and careful monitoring. With hospitals stretched thin during the pandemic, the GUIDE Group’s forthcoming recommendations will likely affect how prone positioning is used and how staff resources are used.

Two of the COVI-PRONE investigators, Waleed Alhazzani and Emilie Belley-Côté, are co-chairs of the GUIDE Group.

“Conducting a clinical trial of patient prone positioning during a pandemic – with COVID-19 patients – was a feat on its own,” said Culgin. “We’re grateful to have had such a collaborative network of clinicians and scientists who came together to make this happen.”

Funding for the trial was supported by peer-reviewed grants from the Canadian Institutes of Health Research (CIHR), King Abdullah International Medical Research Center in Saudi Arabia, and a McMaster University COVID-19 research grant.