Three Indigenous students who are already trailblazers in their own communities, reflect on what they have learned from their time at McMaster before their graduation at the Faculty’s and the School of Nursing’s convocations this week. 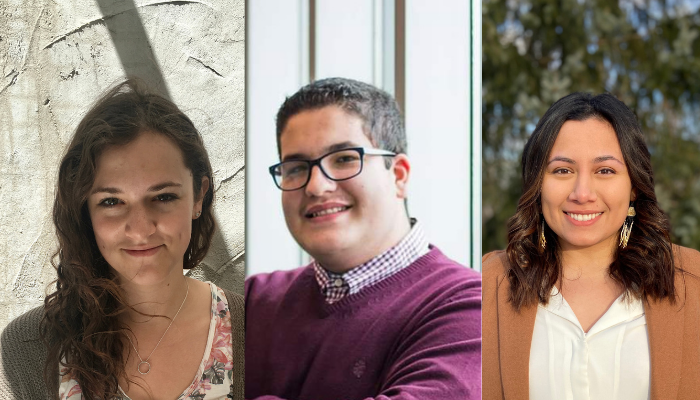 Three Indigenous students who are already trailblazers in their own communities, reflect on what they have learned from their time at McMaster before their graduation at the Faculty’s and the School of Nursing’s convocations this week.

They are among the 638 students from 28 Faculty of Health Sciences programs crossing the floor at the FirstOntario Concert Hall to receive their degrees on May 25. Another 570 students graduate from McMaster’s School of Nursing the following day.

Tonya-Leah Watts says her true calling is serving both Indigenous and rural Canadians as a family doctor.

A member of the Wiikwemkoong First Nation from Ontario’s Manitoulin Island, the graduate has advocated for Indigenous people’s health through both public speaking and music.

“I feel an immense responsibility to give back and give everything I have to those who came before me,” said Watts, who received her undergraduate medical education at McMaster’s Niagara Regional Campus (NRC).

“I have struggled with being very hard on myself and almost keeping myself back from some opportunities, because I felt like I didn’t deserve them,” she said.

Before enrolling at McMaster, Watts took a traditional route to medical school of a science education, completing her undergraduate degree in biomedical science and Indigenous studies at Trent University in Peterborough, where she grew up.

To build up her resume, Watts spent her summers as an intern at SickKids in Toronto, where she learned basic medical research protocols in their hospital’s neurosciences lab. She began working there just after graduating high school.

Watts said she sometimes felt ‘imposter syndrome’ when in the lab, as she gained the internship with some help from her high school choir teacher, whose friend owned the lab.

However, she soon overcame her doubts, working alongside other Indigenous and Black Canadians as part of an effort by SickKids to include people who have historically been under-represented in health sciences research.

“I worked hard, and I deserved these opportunities,” said Watts.

She found it hard at first being away from home, when she began her studies at the regional campus of McMaster’s medical school in St. Catharines.

Nevertheless, Watts soon settled into campus life, helped by a supportive group of instructors and classmates, forging close friendships through her program.

“It was tough walking a trail that few others have walked, but McMaster was always there with a helping hand to assist me in achieving what I needed,” said Watts.

“Both my time at McMaster and working at SickKids helped me develop my sense of belonging and reassured me that I do have a place in medicine. It is extremely rewarding and comforting to know that there is a community of Indigenous people working in health sciences.”

Watts has spoken publicly about her own family’s experience of residential schools, which her grandmother survived. Her mother was also part of the ‘Sixties Scoop,’ when Indigenous babies were adopted out to non-Indigenous couples.

Watts, who plays drums, guitar and sang in her school choir, performed a song for Indian Horse, a feature film produced by Clint Eastwood about an Indigenous boy in a residential school.

She also wants to mentor other Indigenous health sciences students, having been a mentee in both school and university.

“From my own perspective as an Indigenous person, I can put myself in the shoes of those who are marginalized or impacted negatively by the health-care system,” said Watts.

“Being aware of this has inspired me to keep learning – and hopefully be a friendly face in the clinic.”

Watts has now matched with the University of British Columbia’s Family Practice Residency program based in Kamloops.

For Tristan Bomberry, a member of the Cayuga Nation from the Six Nations of the Grand River, studying at McMaster University was a homecoming of sorts.

Born and raised in Hamilton, Bomberry is currently involved with the Department of Medicine study on COVID-19 vaccine efficacy and access at the Six Nations of the Grand River, where his family are from.

“Indigenous people have often been denied a voice in the work we do within academia and science,” said Bomberry, who is graduating with his Bachelor of Health Sciences (Honours) degree at McMaster.

“Now that I have this opportunity, I want to use the privilege of being at McMaster in the first place to give back to my community and continue to help grow the resilience of the Indigenous population in Turtle Island (North America).”

Bomberry said he felt fully supported by McMaster through his studies, with instructors showing awareness of both being on unceded Indigenous lands and the Hamilton region’s Indigenous history.

Students were also encouraged to explore this history themselves and the university was sensitive to Indigenous students’ needs, which Bomberry said was part of the reconciliation process. One example is McMaster’s Facilitated Indigenous Admissions Program, which aims to provide equitable access to students who self-identify as First Nations, Métis or Inuit.

He was grateful for the opportunity to discover his Indigenous heritage at McMaster, as much of his family history was erased and not passed down to him.

“My advice to others like me would be to not be afraid to take up space as an Indigenous student,” said Bomberry. “Know that you have earned your spot at McMaster, and you really do deserve to be here.”

For now, Bomberry will continue working as the senior research assistant for the vaccine study that is still underway.

His next step is applying for graduate programs in either public health or medical school. He aims to pursue a career in public and community health.

“To say I learned a lot while at McMaster would be a cliché because I cannot fathom the amount that I have grown through these last four years into a single sentence. I do not mean just in academics, but myself as a person,” said Bomberry.

Elizabeth Kliska’s defining ‘McMaster moment’ came while working on a psychiatry rotation at Kitchener’s Grand River Hospital and an Indigenous patient asked to incorporate traditional medicine in his treatment.

He was a patient of Kliska’s preceptor who hesitated over the request for traditional medicine. Kliska stepped in as an impromptu advocate, helping the patient receive a smudging ceremony and traditional teas. As a Métis person from the Red River Settlement in Winnipeg, she felt able to intervene on the patient’s behalf.

“He already knew an elder in the community who would help him, so my role was explaining his plan to the psychiatrist—the elder would do the counselling on traditional healing,” said Kliska, who studied at McMaster’s Waterloo Regional Campus (WRC) of the medical school.

“I feel that every day I can make a difference and I think to myself, ‘I’m so glad I had the opportunity to that’,” she said.

“I am so excited, because working in medicine is a dream come true and I couldn’t imagine anything else I’d rather do with my life.”

Kliska said that Indigenous people are still marginalized in hospital settings, as doctors are often not aware about their specific needs. This includes incorporating holistic health practices and cultural respect, such as allowing medicine wheels with sacred herbs and smudging ceremonies in hospitals.

Kliska prepared for her new career by volunteering with the Oshawa and Durham Region Métis Council, where she talked with community elders about their healthcare experiences.

“It is disappointing, some of the stories you hear and we as a health-care system must do better in terms of what we offer to Indigenous patients,” said Kliska. “We are not there yet.”

Having enjoyed her time at the WRC, with strong support from instructors and a solid group of friends, Kliska is headed to a family medicine residency program in Vancouver. Based out of St. Paul’s Hospital, Kliska will work with marginalized and inner-city patients, many of whom will be Indigenous.

Kliska also plans to fly out to remote Indigenous communities in northern Canada to provide care for these under-served populations.

“Before medical school I worked six years in an office job, but I wanted to do more with my life,” said Kliska.