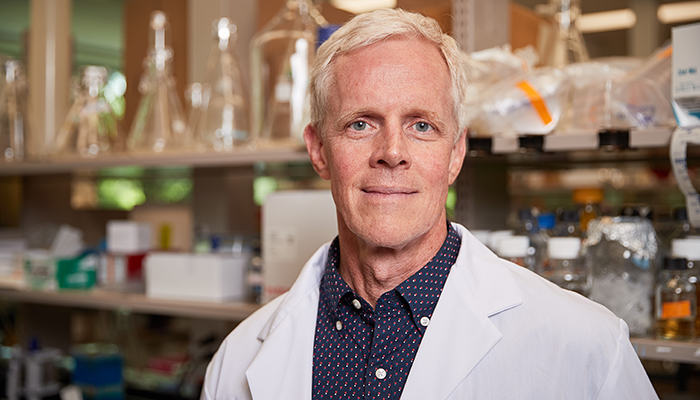 Eric Brown is a professor of biochemistry and biomedical sciences at McMaster University.

It was by chance that McMaster University professor Eric Brown found a possible solution to the growing problem of antibiotic resistance: bicarbonate.

This potentially game-changing solution is called BCX and, if successful, could both combat drug-resistant bacteria and help develop a thriving biotech sector in Hamilton.

“It is crazy because it is so simple,” said Brown, a Distinguished University Professor of biochemistry and biomedical sciences at McMaster and a member of Canada’s Global Nexus for Pandemics and Biological Threats as well as the Michael G. DeGroote Institute for Infectious Disease Research.

“The epiphany came when we were doing animal studies of infections and treatments and there were some compounds that worked much better in animals than on a petri dish, so we tried to figure out what the magic ingredient was. It turned out bicarbonate was the key.”

He said that bicarbonate’s effectiveness could be explained by the role it plays in helping the immune system fight off harmful bacteria and other pathogens.

While this is still “just a hypothesis,” as Brown put it, bicarbonate could nonetheless be a key ingredient in the development of new antibiotics to combat drug-resistant bacteria.

He said that adding bicarbonate both improves the uptake of azithromycin into infected cells and expands the activity of many drugs against both gram-negative and gram-positive pathogens. A bacterium is defined as either gram-negative or positive depending on if they appear purple under a microscope when coloured with crystal violet during gram-stain tests.

Secondly, the ability of bicarbonate ions to drive increased uptake of drugs by infected cells overcomes both the intrinsic and acquired form of drug resistance in bacteria, Brown said.

“The next stage for BCX is trials in humans, which we can fast track as azithromycin is already being used and bicarbonate is so benign,” said Brown.

“The two components of this therapy have a long history of use by humans, so the regulatory hurdles are low, but what remains to be proven is whether or not it works.”

Farha said that BCX also has potential as a topical solution to treat infected burns and the military have already expressed interest. She said an effective battlefield solution applied on burns before injured soldiers reach hospital could save many lives.

She said that BCX could in future be turned into an aerosol spray to combat chronic lung infections that are often a complication of cystic fibrosis. Another potential target for an aerosol treatment is tuberculosis (TB) – a textbook example of antibiotic resistance for many clinicians. Currently, TB infections require months-long courses of multiple oral antibiotics to achieve a cure.

“BCX has great potential, and it could be a game-changer in the field of antibiotic development and infectious disease research,” said Farha.

“Drug-resistant bacteria are a huge and growing problem. The fact you can add bicarbonate, a simple everyday ingredient, to reverse both acquired and intrinsic bacterial resistance is hugely significant,” she said.

“This discovery is truly unique and being the person who made it just leaves me speechless.”

Brown said that this particular research project began about five years ago, but the idea of a topical cream took root only in the last year or so.

“There is a huge need for new antibiotics, notwithstanding the difficult commercialization environment where all new drugs are reimbursed by volume of use, an inefficient approach that governments are trying to change,” said Brown.

“In my field as a biomedical scientist, I feel that when we find something useful, I have a responsibility to make it so. This is my true motivation.”

Brown said that he was keen to see ventures such as Synmedix help lead a thriving biotech sector that could rejuvenate Hamilton’s economy, having witnessed its 1990s post-industrial decline in the city.

He said Hamilton could have a prosperous future as a biotech hub, having seen how medical entrepreneurs have already transformed the fortunes of American cities like Boston, where he previously worked.

Brown is also talking with venture capitalists who see potential in a McMaster-based medical innovation economy. A successful local biotech sector will also stem an ongoing ‘brain drain’ of Canadian graduates to the United States.

“This is an exciting time for us, and I am seeing the needle move,” said Brown.

Karen Mossman, McMaster’s vice-president of research, said that Brown’s proposal was one of 18 submitted to the McMaster Seed Fund (MSF) from a variety of disciplines within the faculties of engineering, science and health sciences.

“The MSF was designed to foster our culture of commercialization and social innovation across the university in an effort to positively impact society and it’s certainly living up to its mandate,” said Mossman.

The seed fund was established recently to enable start-ups at the university to complete value-add experiments or validate their market that will best position them for a series A investment. Synmedix was recommended for funding based on the quality of the team and the technology.