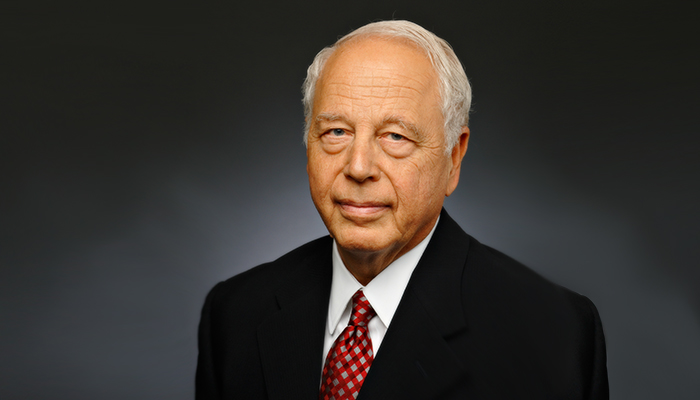 He also left many memories of a well-dressed, caring gentleman who always made everyone feel recognized and appreciated.

“Peter Dent was a brilliant academic physician and role model to so many,” said Paul O’Byrne, dean and vice-president of the Faculty of Health Sciences.

“He was the kind of doctor that everyone would like to have, as he was knowledgeable, caring and had a confidence that you could trust.

“He was also a wonderful colleague, being not only very congenial, smart, an excellent negotiator and a friend to a lot of people, but also passionate about the Faculty of Heath Sciences and its success. He was someone who was accorded the unqualified admiration and respect of everyone who knew him.  He will be very sadly missed."

Dent, a pediatrician with training in rheumatology and immunology, joined McMaster’s fledgling medical school in 1968 as a research scientist in immunology.

The research team was noted for its international impact in what was a relatively undeveloped field, and Dent created Canada’s first multidisciplinary program in immunology and virology.

While chair of McMaster’s Department of Pediatrics from 1980 to 1990, he founded McMaster Children’s Hospital. He also led the development of Hamilton’s Ronald McDonald House for the families of sick children in the hospital.

He held several senior hospital appointments as vice-president (medicine) for Chedoke McMaster Hospital and director of research for Hamilton Health Sciences from 1990 to 1997.

After becoming professor emeritus in 1996, he became the associate vice-president, clinical services for the Faculty of Health Sciences from 2002 to 2012, and he was instrumental in negotiating with the Ontario Ministry of Health and Long Term Care for a new way of funding academic physicians.

He also remained active as a clinician at McMaster Children’s Hospital in the care of children with rheumatologic and immune deficiency diseases. He retired as head of pediatric rheumatology at McMaster in 2015, and from clinical service in 2020.

He received several local and national awards for his achievements. In 2017, he was named as a member of the Order of Canada, the highest civilian honour in the country. In 2004 he received the James T. Cassidy Award for excellence in teaching and patient care from the American Academy of Pediatrics; in 1996, Hamilton Health Sciences’ Cornerstone Award; in 2008, he joined the Hamilton Gallery of Distinction; and, in 2015, the Faculty’s Community of Distinction.

“Our community will be forever grateful to him as one of the architects responsible for establishing McMaster Children’s Hospital – a proud piece of his legacy that will continue to serve families in our region and beyond for years to come.

“His contributions to clinical care, research, and leadership in the field of pediatric rheumatology and immunology were immense and far reaching,” Mikrogianakis said.

“He was a constant presence in our academic department – always ready to collaborate and advise in order to care for children and improve their well-being. He has had a profound impact on so many of us and he will be deeply missed.”

Besides his work, Dent was known for his warm, friendly manner, his natty dressing, his love of the arts, and his expertise growing dahlia flowers.

John Kelton, a professor of medicine and former dean and vice-president of McMaster’s Faculty of Health Sciences, said: “Dr. Dent is a remarkable role model, not only for his clinical work, but also as a leader, volunteer and advocate for improving child and youth health in the community.

“He has been a constant source of wisdom for me and generations of pediatricians and health-care leaders.”

Kelton described Dent as a gentleman who treated everyone with respect and considered every opinion carefully.

“At meetings I would attend, he would appear five minutes early to say hello to the staff, always with a happy comment and curiosity about their lives and families. I knew it was August without looking at the calendar because Peter would bring in bouquets of dahlias from his garden to put on everyone's desk.”

“He was a gentleman and a scholar, a lover of the arts. Outside of work, we would often run into each other at the symphony, art gallery or Hamilton’s film festivals. He also had a flair for style, always a brightly coloured handkerchief in his blazer pocket.”

Dent was unassuming, always sharing the recognition when he received awards for his achievements.

"I've just been very lucky," he said, upon receiving the Order of Canada. "I've been in the right place at the right time, and things eventually fell into place."

In response to interest in the impact of Dent’s work, a collaborative fund has been created by McMaster University and Hamilton Health Sciences. The funds of the Dr. Peter Dent Memorial Award will be used to honour his legacy. The McMaster fund may be found at: https://bit.ly/3ERKTBc . There is also a Hamilton Health Sciences Foundation site that is fundraising for the same fund.

He leaves his wife Diane Dent, and three daughters Jennifer, Ashley and Rebecca and their families. Funeral arrangements details are available through Smith’s Funeral Home on Brant Street, Burlington.