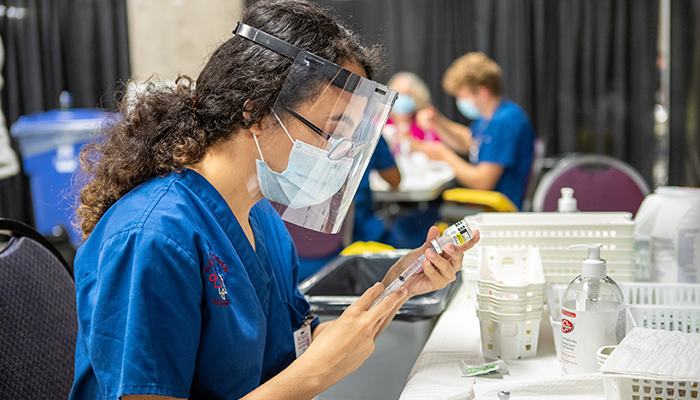 When Melanie Piché walked into FirstOntario Centre in downtown Hamilton to face eager patients seated before her for their COVID-19 vaccines, she had no idea what to expect.

But the third year McMaster University nursing student quickly found her stride, asking patients the routine questions about allergies and medications before giving the vaccine under supervision of her instructors and public health nurses.

Piché and fellow student Aliya Hadi are two of 113 School of Nursing (SON) accelerated stream students who have been working and learning at the city’s mass vaccination clinics two days a week. Their team started in mid-May and will help with the administration of vaccines with the Hamilton Public Health Services until late July.

“We’re contributing to the largest public health intervention in Canadian history. It is so motivating to say that you played a small part and contributed to it in a positive way,” said Piché.

Hadi offered some details of how a Pfizer injection is administered.

“Press two fingers down, wipe the skin with an alcohol swab and you just want to make sure the dose is exactly 0.3 millilitres, Pfizer shots must be very precise. It’s a dart-like motion into the spot that you wipe, then a little bit of gauze to stop the bleeding, if any,” said Hadi.

“It feels like such a special and unique opportunity to be a part of this,” she added. “The pandemic has been affecting everyone and we all have to play a small part in helping progress towards that endpoint, where everyone is safe and has an opportunity to get the vaccine.”

Meantime, Piché is also enjoying the camaraderie between herself and other nurses on-site. In between vaccinating patients and numerous debriefings, it is a friendly, collegial atmosphere, with Piché describing her fellow nurses as “super helpful.”

She has personally vaccinated 60 to 70 people since starting her placement.

The work at the vaccine clinic has been worked into the curriculum of the community health course of McMaster’s accelerated nursing program for students with a previous university degree in science.

“This is a group that was very strong in the sciences before they come to us and their success in the program is excellent. This is a wonderful partnership with Hamilton Public Health and an opportunity for collaborative learning,” said Joanna Pierazzo, assistant dean of the SON’s undergraduate nursing education program.

For the vaccine clinics, the student group is split into two cohorts, each of whom will work for two days per week over six weeks. Each cohort has orientation the first week, followed by five weeks of vaccine administration.

As of June 17, more than 88,000 people have been vaccinated at FirstOntario Centre, said Jennifer Mitton, nursing practice advisor for the Hamilton Public Health Services.

“It is important to have the students in our clinic to help with the vaccine rollout, both in terms of the number of people we are vaccinating, and then from a learning perspective,” said Mitton.

“I think this is an important partnership, because they are able to contribute to our pandemic response, and this is a unique learning opportunity around the role of public health nurses in a public health emergency.”

During the vaccine clinics, students are supported by clinical supervisors and nursing staff, and all the instructors have both an academic and a public/community health background.

At the vaccine clinic, assistant nursing professor Tracey Jewiss says the students are learning much more than how to give someone a jab of vaccine.

“They’re learning how to use the COVAX system, how to correctly document on the system, checking in individuals with and without health cards, assisting those where English is not their first language, as it is their first time using the assistance of translators,” she said.

“It is great to see the students being so caring and using their therapeutic communication techniques and the research evidence to help allay the fear of needles for some people and the hesitancies of the public.

“As part of their role and responsibilities, they are taught the policies and procedures that surround the reconstitution of the vaccine, how to handle it and draw it up properly into the syringe. They had already been taught in lab how to do intermuscular injections but here they learn to be able to administer vaccines on people of all different ages and how to customize their care to be person centered.

“The students have also had the opportunity to sit at the check out stations and help with any adverse effects from the vaccine and then provide the people with the documentation that states they have been vaccinated.”Hamilton Public Health Services first reached out to the nursing school in February, inviting students to join the city’s vaccination drive.

“There is a lot of resilience on the part of the students as we could not give them a clear schedule as to when clinics would start until we were absolutely certain. They were adaptive and flexible to change. That was very positive for our group,” said Pierazzo.

She added that the students will be transitioning to the final year of their nursing program in the fall, with licensing exams soon to follow.