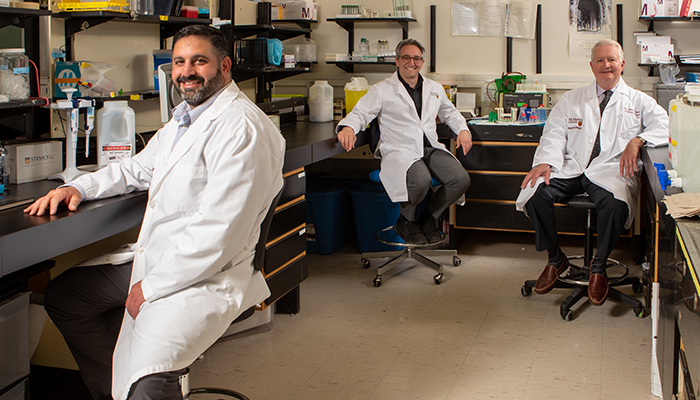 For John Kelton, it has been 44 years since a steady trickle of babies arrived at his hematology clinic with low platelet counts and unexplained bleeding.

This mystery condition soon had a name: neonatal alloimmune thrombocytopaenia (NAT), for which Kelton and his colleagues developed a diagnostic test and treatment. It happens when parents’ platelet makeups are mismatched.

But cracking the code behind NAT was only the start of a decades-long scientific detective drama, pitting the McMaster Platelet Immunology Laboratory (MPIL) researchers against the mysterious platelet, a tiny clotting cell once called ‘blood dust’.

“Thinking back over 40-plus years of this research lab, it’s an ongoing detective story that’s wonderfully fun. I think of us as CSI Hamilton, except we have no good-looking actors. No murder and mayhem. And no high-priced talent. Otherwise, almost identical,” said Kelton, a professor of medicine and founding member of the MPIL.

“I study the smallest blood cell there is, and my ambition is to know absolutely everything there is, about something that is almost nothing.”

But CSI Hamilton’s season finale is still a long way off, as the platelet continues to throw up one mystery after another for Kelton and his colleagues.

Soon after cracking the mystery behind NAT, Kelton and his team were hot on the case of another clotting disorder caused, ironically, by the blood-thinner heparin.

Kelton noticed a cluster of clotting in patients taking heparin in Hamilton, which is a global hub for the drug’s use, as its clinical trials were carried out here.

While this side-effect is rare in patients on heparin, it can be lethal. After studying blood samples, the MPIL devised a test for heparin-induced thrombocytopenia (HIT).

But the platelet never gives up its secrets willingly. The lab’s scientists are still investigating what triggers immune thrombocytopenia which causes low platelet counts and bleeding.

That is why it is important for Kelton and his colleagues to stay on the trail by decoding the genes and molecules behind platelet disorders in patients.

For Kelton, such tenacity brings its own rewards from grateful patients, even if their platelets are stubborn customers.

“One of the patients I took care of named her daughter Kelton. That was a wonderful honour for me. These are the things in life that matter,” said Kelton.

Holding on to such meaningful memories no doubt helps MPIL scientists withstand the hurricane wrought by COVID-19.

When the pandemic first broke out in early 2020, its researchers noticed a spike in cases of what seemed like HIT.

It was Kelton’s colleague Ishac Nazy, one of a new generation of scientists, who proved instrumental in cracking this mystery.

Nazy, who first joined the MPIL in 2006, said that pinpointing the exact cause of clotting will allow scientists to develop new life-saving treatments.

Unlike the paramedics and frontline healthcare workers who have been on the pandemic’s frontlines – and often in the news – MPIL scientists have quietly worked in the shadows.

This includes scientists Ted Warkentin and Cathy Hayward as well as technicians Jim Smith, Jane Moore and Rumi Clare, who often work around the clock.

Their work is a point of pride for Nazy, an associate professor of medicine.

“Behind the headlines are the researchers who are discovering the tools to study the infection, immune response, and disease mechanism, to develop better treatments and the most effective tool, which is vaccination. That was developed by scientists, working behind the scenes.”

Besides ongoing federal and provincial government support, the  lab has also received significant support from philanthropists Michael G. DeGroote and the Boris family of Hamilton.

Earlier this year, MPIL researchers tested blood samples collected across Canada to seek clues behind blood clots caused by the AstraZeneca vaccine. Clotting is a rare side-effect in some people caused by the vaccine.

While governments paused doses of AstraZeneca shots for under-55s and then under 40s, MPIL scientists investigated the cause of vaccine-induced immune thrombotic thrombocytopenia (VITT).

VITT happens when the vaccine triggers the formation of antibodies that attack platelets, causing them to clump together and form blood clots.

From bench to bedside

For Nazy, a successful MPIL rests on a strong partnership between himself and his colleague, hematologist and clinician scientist Donald Arnold.

All MPIL research focuses on improving patient well-being, from the hospital room to lab bench and back again, ideally with a new treatment in hand.

“It’s a true bench side to bedside program,” said Nazy. “We are a one-stop shop and we will figure out your platelet disorder. My collaboration with Dr. Arnold is one of the strongest in research.”

As Nazy works at the laboratory bench, Arnold sees patients from around the world at McMaster’s platelet disorders referral clinic, many with rare bleeding and clotting disorders. Blood samples are shuttled from patients’ arms to Nazy’s lab bench, with test results sent back to the clinic.

For Arnold, effective treatment goes beyond tests and medication to education and empowerment, helping patients understand and manage their platelet disorders.

“It’s a great sense of relief, I feel that I’ve been able to empower people. It feels really satisfying to see small but meaningful improvements in a patient’s life, because they have a better understanding of their disease,” said Arnold.

“They’ve had their ups and downs, but we’ve helped them get through this, they are still leading productive lives, have their own families and are contributing members of society, which is very rewarding.”

He often tells patients they know more about their condition than the average physician, recalling some who later showed up at the emergency room (ER) with heavy bleeding.

“They were the ones calming down the ER doctors,” said Arnold.

While MPIL scientists are the best in the business, trial and error is an inevitable part of their research.

As COVID-19 tightened its grip last year, there was great excitement that blood plasma from people recovered from the virus could be a useful treatment for intensive care patients.

A trial of nearly 1,000 hospitalized COVID-19 patients spanning Canada, the United States and Brazil was conducted, led by MPIL researchers and their counterparts in Toronto and Montreal.

Interim results showed that plasma infusions were not helping COVID-19 patients, with the full data yet to arrive.

Nonetheless, the trial demonstrated the MPIL’s ability to coordinate with hospitals across Canada and internationally, forming a vast medical network for efficient large-scale clinical trials.

“The trial will still provide very important data and it might be that convalescent plasma should not be used in COVID-19 patients,” said Arnold.

The storylines for the lab that could be called CSI Hamilton continue to develop.