An all-digital celebration is planned this month for the McMaster University School of Nursing (SON)’s 75th anniversary. Coinciding with National Nursing Week starting May 10, the school’s anniversary will feature keynote speakers in webinars. 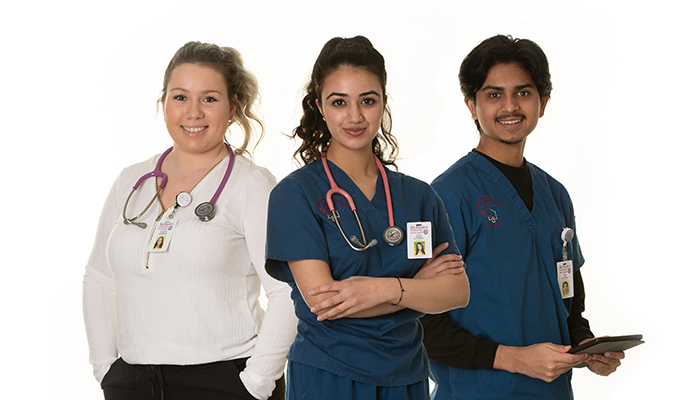 An all-digital celebration is planned this month for the McMaster University School of Nursing (SON)’s 75th anniversary.

Coinciding with National Nursing Week starting May 10, the school’s anniversary will feature keynote speakers in webinars.

There is a website for the 75th anniversary; an online book where alumni can share memories and reconnect; a photo montage video; a large billboard on the Health Sciences Centre, and commemorative 75th anniversary pins for alumni donors and this year’s graduates.

“It makes me feel very proud to be able to celebrate during the pandemic,” said Sandra Carroll, vice-dean, health sciences and executive director of the school.

“It’s important to mark this anniversary given the critical role that nurses are playing in to answer the call in many roles, not only the significant work caring for COVID-19 patients and delivering vaccines but also providing ongoing care to all.”

The free events will focus on the past and future of nursing, and registration is available through https://bit.ly/3vs4zGl

On May 11 at 7 p.m., Marilyn Ray is speaking on ‘Nursing research, theory and policy: Global impact in action’. She is a professor emeritus and adjunct professor at Florida Atlantic University, served as a colonel in the US. Air Force Nursing Corps and held clinical positions in several hospitals and universities.

On May 13 at 7 p.m., Michael McGillion and Nancy Carter, both SON alumni and current faculty members, will host ‘Lightning talks: McMaster nurses share their vision for the future’. They will introduce a panel of undergraduate and graduate students who will share highlights of their learning and research and vision for the future.

On May 14 at noon, former SON director Susan French will talk on ’75 years of innovative nursing education and research: Looking back and looking forward’.

She was director of the McMaster SON from 1980 to 1990 and went on to direct the nursing schools at Dalhousie and McGill universities. She also played a key role in establishing the national accreditation system for Canadian nursing schools.

The school has established a website for the 75th anniversary at healthsci.mcmaster.ca/nursing75, which includes notes on the SON’s history, the opportunity to donate towards the school and its bursaries, and a class book accessible to the school’s alumni, faculty and staff where they may find updates and share memories with others and add their own.

“We’ve had dozens of alumni and former and current faculty and staff add their memories and pictures already, and it makes for a good read. I’m very touched by some of the messages,” said Carroll.

There is also a huge billboard for the school’s anniversary featuring current nursing students being installed on the south face of the school’s home in the Health Sciences Centre, also known as the McMaster University Medical Centre, on Main Street in Hamilton.

The school has plenty to celebrate, as many of its graduates go on to practice across Canada and the world, influencing practice, policy, and health care. Alumni are leaders in nursing schools and research as well as working on humanitarian aid missions in disaster and conflict zones.

The SON today has approximately 2,000 students across undergraduate and graduate programs.

As the SON turns 75, Carroll has an optimistic message for alumni taking part in the virtual celebrations, despite the turmoil caused by COVID-19.

“Look how strong we are. We are embracing the pandemic’s challenges by continuing to prepare our nurses to enter practice after graduating,” said Carroll.

Her school’s bright outlook is built upon a solid history.

The SON began with a conversation between Constance Brewer, superintendent of nurses and director of the School of Nursing at Hamilton General Hospital (HGH), and McMaster’s Dean of Science Charles Burke, in the 1930s, just after the university moved to Hamilton from Toronto.

Both agreed on the need to prepare nurses as leaders in the fast-changing healthcare sector. Major medical innovations at this time included the introduction of antibiotics, new surgical anaesthetics and vaccines for diseases like polio.

But the original nursing program, including four years at McMaster and three years at Hamilton General Hospital, proved too unwieldy.

This led to the SON’s launch in 1946, starting as a five-year program with Gladys Sharpe as its first director. In November of that year, the school was accredited by the Nurses Registration Act of Ontario.

In 1970, the SON completed its first research project, exploring the emerging role of nurse practitioners. The school is now renowned for its research focus and currently has seven endowed research chairs and a Canada Research Chair.

In 1979, the SON’s scope went international, starting a 23-year collaboration with the Aga Khan University School of Nursing in Karachi, Pakistan, funded by the Canadian International Development Agency.

In the new millennium, the school inked an agreement for a collaborative BScN program with Mohawk and Conestoga Colleges, enrolling their first BScN students in 2001.

Since 2007, the SON has also offered an accelerated 20-month BScN program for new nurses.

The school is raising money for its priorities, including bursaries. More information may be found at: https://bit.ly/3sSnyIq