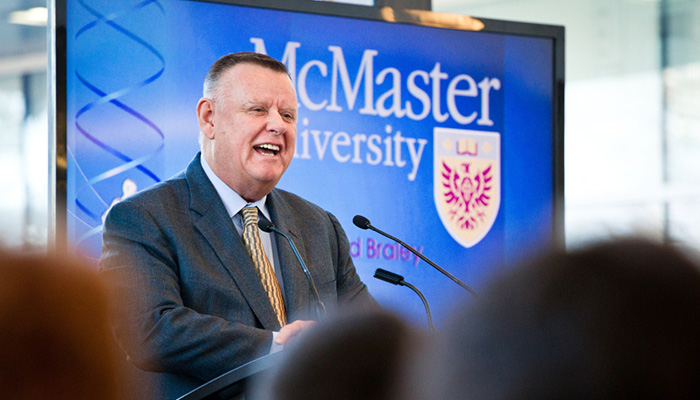 David Braley speaks at the 2012 announcement of the Boris Family gift to the Faculty of Health Sciences at McMaster University.

The philanthropist and former Conservative senator had established endowed chairs in family medicine and urology at the Faculty when, in 2007, he announced a $50-million investment in McMaster. His gift has had a wide impact across the university, benefitting causes ranging from athletics and sports medicine and significantly, to health education and research.

“David Braley was an architect of transformative change as he knew one of the best ways to help his community was to provide support that would lead to improved health,” said Paul O’Byrne, dean and vice-president of the Faculty of Health Sciences.

“His interests and generosity have been wide-ranging, and at the Faculty he has enriched discovery and learning in areas ranging from family medicine, urology and thromboembolic diseases to antibiotic resistance and infectious disease. We are deeply appreciative.”

The impact of his gifts to the Faculty is both visible to passers-by and to those working behind the scenes in health science research and education.

The David Braley Health Sciences Centre on Main Street in downtown Hamilton opened in 2015 as home to the Faculty’s Department of Family Medicine (DFM), a large family health clinic and programs for continuing health sciences education, faculty development and education research development. Uniquely, it is also home to Hamilton Public Health Services, allowing for close collaboration between the public health service and the DFM.

At the 2015 opening of the David Braley Health Sciences Centre, Braley said: “This is what it’s all about. People being part of a community.” 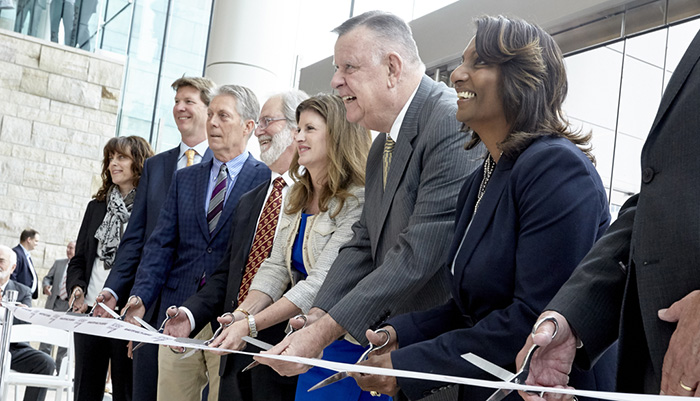 Reflecting on the sad news, David Price, chair and professor of family medicine, said: “While I don’t have any insight into what makes a successful business entrepreneur, I have no doubt his care and compassion both for individuals and his community contributed to his success.

“He recognized the value of family medicine and the importance of effective communication between doctors and patients early on. In all of my interactions with him, he never failed to ask after my family and how I was doing.

“His support ensures that his legacy will live on in terms of the care we provide to our patients, the education of our learners and the research knowledge being developed by our department.”

“David Braley was a person who was larger than life, both figuratively and in reality. He was a person who I looked forward to seeing and invariably came away wiser for the interaction. His size, befitting the position of tight end, which he played, gave him a presence. But it was his advice and wisdom that was always the most compelling.

“Beyond his gruff exterior was an internal kindness and generosity that was profound. He cared deeply about his family, about his businesses and especially his employees, and he also cared about Hamilton and McMaster. David would often say to ‘keep your eye on the ball’ and have a broad vision, yet despite this broad vision he had a remarkable focus on the important details.”

Salim Yusuf, executive director of PHRI, said: “David Braley was committed to improving health in Hamilton and contributing to the betterment of the local community. By supporting the David Braley Cardiac, Vascular and Stroke Research Institute, which brought together 500 researchers, the impact of his generosity was also global.”

Last year, the David Braley Centre for Antimicrobial Resistance opened on the university’s campus. Based out of the Michael G. DeGroote Institute for Infectious Disease Research, the centre is home to McMaster’s leading researchers in the field of antimicrobial resistance.

Gerry Wright, who heads both the David Braley Centre for Antibiotic Discovery and the Institute for Infectious Disease Research, said: “David Braley was a giant among philanthropists and such an amazing champion of McMaster.

“He emphasized that we should focus on areas where we can take global leadership and challenged us to think big and have impact. The David Braley Centre for Antibiotic Discovery is testimony to his vision and generous support.”

“Mr. Braley’s financial generosity and loyalty to his country and local community is unprecedented,” said Mick Bhatia, professor of biochemistry and biomedical sciences and the founder of the screening facility.

“My work, and those of my close colleagues, continues to benefit from his thoughtful kindness, as will the patients our results impact for decades to come. Lesser known to the public is the impact Mr. Braley has had on the individuals he worked with. His authentic care and advice both carried on his wisdom gained from the private sector and provided inspiration for scientists and physicians to do better. He will be missed and I, for one, will not forget his influence.” 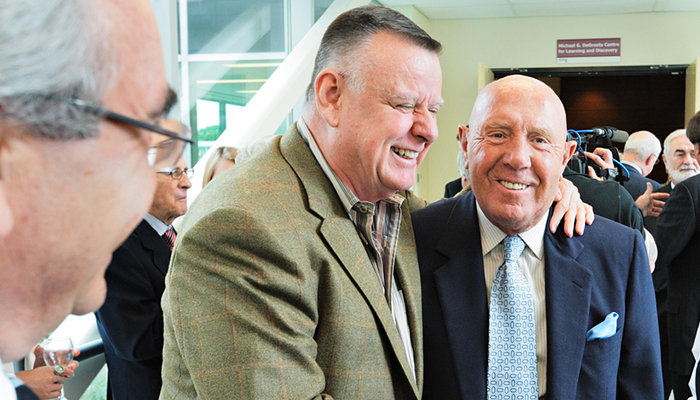