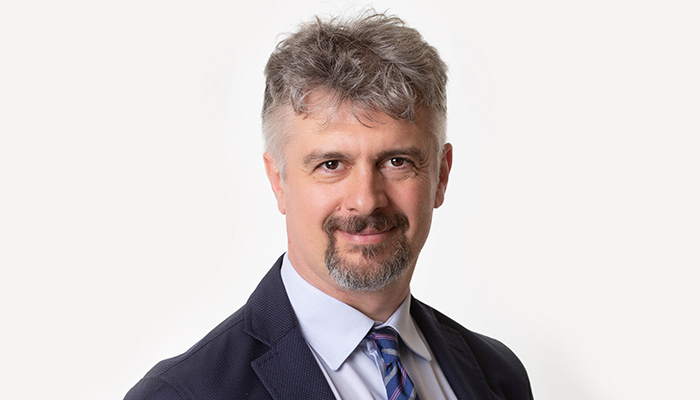 Alfonso Iorio is to chair the Department of Health Research Methods, Evidence, and Impact.

Iorio begins the position on Oct. 1, pending final endorsement by the university.

A professor of HEI and the Department of Medicine, he is director of the Health Information Research Unit since 2014, and the inaugural holder of the Bayer Chair for Clinical Epidemiology of Congenital Bleeding Disorders, established in 2018.

“I am truly excited at being appointed chair of HEI,” said Iorio.

“I loved this department at first sight, and I conceived the idea of pursuing a career in research when I met Jack Hirsh, David Sackett and Mike Gent here at McMaster in 1993, but I would have never imagined one day being called to chair it.

“I look forward to dedicating my time, energy, and creativity to evolve this fantastic and unique department, and enhancing the chances of success of our established and amazing junior faculty members who make the department vibrant.

“HEI’s leaders have changed the way the world thinks of health care, but this is a never-ending task. The many opportunities to impact on local, national and international health makes me impatient to start in the role,” he said.

As a hematologist, Iorio is director of the Hamilton-Niagara Regional Hemophilia Treatment Centre at the McMaster University Hospital, as well as on staff at the Thrombosis Service, Juravinski Hospital.

Building on the track record of success of the McMaster PLUS/MORE project of the Health Information Research Unit, Iorio has exploited the PLUS database to support a suite of dedicated services including PreventionPlus, ClotPlus, PainPlus, and the Optimal Aging Portal, which funnel sound evidence to physicians and patients in Canada and internationally.

He secured a long-term collaboration agreement with EBSCO Health, supporting the free provision of the PLUS content to tens of thousands of practicing physicians via the EvidenceAlerts service, and the editorial process of the online clinical resource DynaMed.

Iorio is also well known for his work optimizing care for hemophilia and allied bleeding disorders.

At McMaster, he has established a nation-wide information technology database program, the Canadian Bleeding Disorders Registry, twinned with a similar initiative in Australia and with the largest adverse effect surveillance program of bleeding disorders treatments in Europe.

A model for longitudinal data collection in the field of rare bleeding disorders, this registry has been key in re-establishing the prevalence and prevalence at birth of hemophilia worldwide.

He has co-developed, with patients, the Patient Reported Outcome, Burden and Experiences (PROBE) questionnaire, a multilingual assessment tool adopted in more than 75 countries and supporting the assessment of value in hemophilia care.

“This department is world renowned for its terrific capacity to conceive innovative ideas in the generation, retrieval, and appraisal of evidence across a broad spectrum of health care fields,” he said.

“Dr. Iorio has an excellent background in conceiving and implementing large collaborative networks including their business models, and I know he’ll be able to forge a winning future for the department.”