The late Joshua Shadd was known for his collaborative leadership style, compassionate approach to palliative care, and his unique socks. His colleagues in the Division of Palliative Care at McMaster University’s Department of Family Medicine are rallying to honour his memory, and raise money for his family, through the sale of Shadd socks. The initiative is also gaining traction on social media, with #ShaddSocks. 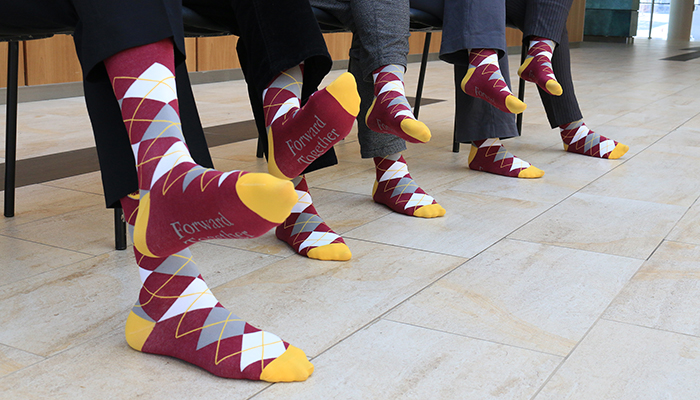 A close-up look at Shadd socks modeled by members of the Department of Family Medicine at McMaster.

The late Joshua Shadd was known for his collaborative leadership style, compassionate approach to palliative care, and his unique socks.

His colleagues in the Division of Palliative Care at McMaster University’s Department of Family Medicine are rallying to honour his memory, and raise money for his family, through the sale of Shadd socks. The initiative is also gaining traction on social media, with #ShaddSocks.

“Shortly before he passed, Josh had come up with the idea of Division of Palliative Care socks as an appreciation gift to faculty to acknowledge their contributions, so we were mulling on this when he died,” said Erin Gallagher, an assistant professor of the Department of Family Medicine who considered Shadd a mentor and close friend.

“The division really wanted to continue on with the idea, but make it Josh-specific so we could support his family.”

Shadd was 45 when he passed away suddenly on Dec. 15, 2018. A member of the Faculty since 2015, he was assistant professor of the Department of Family Medicine and director of the Division of Palliative Care. He was also a palliative care physician at St. Peter's Hospital, and widely respected for his compassion, and his collaborative nature.

He is survived by his wife, Averil, and his children, Julie and Samuel.

“This was a devastating loss for us all,” said Gallagher. “There was something very special about Josh. He had an amazing way of not just bringing people together, but bringing all of their ideas together. He’s the guy who would sit back in a room and listen to everyone speak, then raise his hand at the end and bring it all together.

The team worked in partnership with McMaster’s Campus Bookstore to design and supply the socks. Each pair features McMaster’s crest, the university’s colours in an argyle pattern, and the words ‘Forward Together’ on the soles. These two words were how Shadd signed his emails and closed his speaking engagements.

“Josh loved funky socks, so combining that with his motto was something special that just seemed right,” said Gallagher. 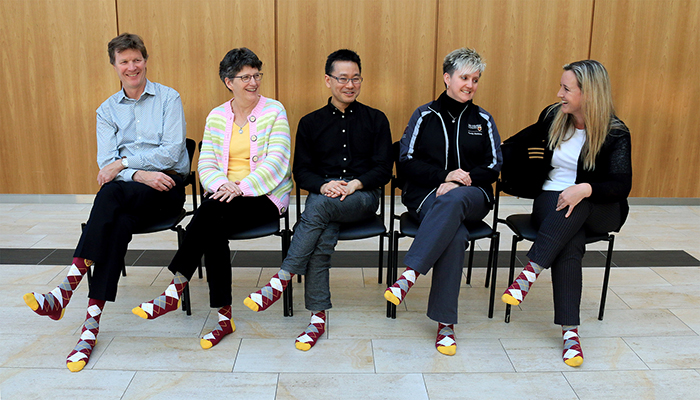 David Price, chair of the department, added: “While death and dying are serious subjects, Josh would often use either humour or his bright smile to both connect with and comfort his patients. He also brought that philosophy to his leadership style which makes the Shadd socks initiative so appropriate.”

Although the death has sent ripples through the division, the sock initiative has evolved into something good to come from such a tragic event.

Gallagher says approximately 200 pairs have been sold to date, with the initiative sparking friendly competition among faculty and staff in the Division of Palliative Care.

“We have more than 500 pairs to sell, so it is an ambitious goal, but there are a few people on board, myself included, who really want to make this work,” said Gallagher. “It has resulted in a very healthy level of competition amongst our colleagues to see who can sell the most, which we are having a lot of fun with. We are sending each other emails and texts, including images of us walking out of the office with arms full of socks.

“The competition for sales is helping us heal as a division after this loss. It has brought us together even further in allowing us to continue on with Josh’s legacy,” she continued.

“Of course, I will sell the most pairs.”

Shadd socks cost $25 per pair. They can be ordered by emailing shaddsocks@gmail.com. Mail delivery is available for an additional $5. Donations of any amount are also welcome.