Three Faculty of Health Sciences professors are among four McMaster University faculty members becoming members of the Order of Canada. Their appointments were announced today by Her Excellency the Right Honourable Julie Payette, Governor General of Canada. Andrea Baumann is the associate vice-president, global health for the Faculty of Health Sciences; Mohit Bhandari is a professor of surgery for the Michael G. DeGroote School of Medicine; and Jack Gauldie is a professor emeritus of the Department of Pathology and Molecular Medicine. 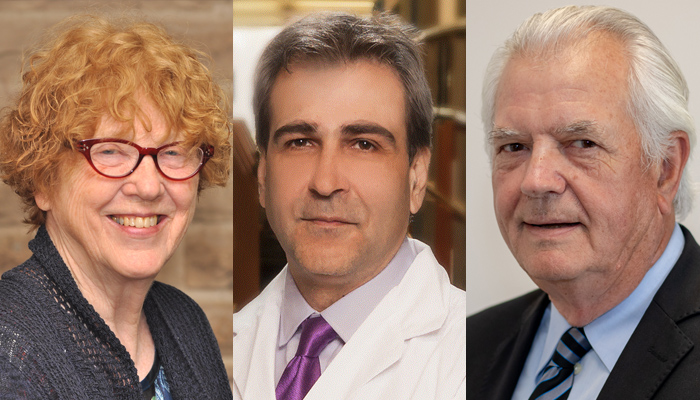 Three Faculty of Health Sciences professors are among four McMaster University faculty members becoming members of the Order of Canada. Their appointments were announced today by Her Excellency the Right Honourable Julie Payette, Governor General of Canada.

Andrea Baumann is the associate vice-president, global health for the Faculty of Health Sciences; Mohit Bhandari is a professor of surgery for the Michael G. DeGroote School of Medicine; and Jack Gauldie is a professor emeritus of the Department of Pathology and Molecular Medicine.

Jamal Deen, a professor of electrical and computer engineering, was also appointed a member.

In addition, Roberta Bondar, a graduate of the Michael G. DeGroote School of Medicine and Canadian astronaut and researcher, is being promoted within the Order to the rank of companion.

Andrea Baumann is being honoured for her significant contributions and leadership in health human resource capacity-building and transdisciplinary collaboration both in Canada and around the world.

Mohit Bhandari was named for his contributions to the field of orthopaedic trauma and for his pioneering research in the area of intimate partner violence.

Jack Gauldie, who is currently the vice-president, research for the St. Joseph's Health System, was recognized for his groundbreaking discoveries as an immunologist specializing in gene therapy, aiding in the treatment of fatal diseases and contributing to the development of cancer vaccines.

Jamal Deen was appointed for his advancements in the fields of electrical engineering and applied physics, and for his leadership of multiple academic and professional institutions.

The four are among 105 Canadians appointed today to one of Canada's highest civilian honours. Members of the Order of Canada are noted for their outstanding contributions at the local or regional level or in a special field of activity. Companions are recognized for outstanding achievement of the highest order in the service to Canada and to humanity.

Baumann said the recognition is a tremendous honour and that she "would like to thank those who have encouraged and inspired me."

"I am fortunate to have had many leadership positions within and outside of McMaster University in relation to nursing, capacity-building and transnational collaboration," said Baumann, noting her success can be attributed to a combination of factors, including working alongside talented people. "With each position, I have learned more about complexity, the need for perseverance and respect for differences and the importance of serving and engaging with our communities."

Bhandari said the recognition with other recipients is "particularly overwhelming."

"Having spent the majority of my career at McMaster, I'm reminded of the uniqueness of our institution and the role models who have been critical to my ongoing growth and development," he said, particularly noting his mentor and friend, professor Gordon Guyatt.

Gauldie called it "a fantastic honour to be recognized in this manner."

"Many colleagues, staff and students have contributed over the years to the advances we made," he said. "McMaster is truly a unique institution that allowed me to achieve scientific discovery at the highest level, providing both great mentors and innovative administration. Progress seems easier when you are supported by outstanding faculty such as Peter George, John Bienenstock and Frank Graham."

Paul O'Byrne, dean and vice-president of McMaster's Faculty of Health Sciences, said the faculty members are more than qualified for this recognition based on their significant contributions to advancing human health in Canada and around the globe.

"Dr. Baumann has a history of guiding significant initiatives that have made an impact on health systems, in Ontario, Canada and around the world," said O'Byrne. "She is deserving of this honour for her strong leadership."

"Dr. Bhandari is the leading researcher in orthopedic trauma world-wide," he said. "He is also known for his leadership in mentoring the next generation of orthopedic experts."

"Dr. Gauldie, who is a long-time and respected colleague of mine, is a giant in the Faculty of Health Sciences," said O'Byrne. "He is renowned for his extensive scientific investigation in the molecular manipulation for the treatment of diseases."

The Order of Canada was established in 1967 to recognize outstanding achievement, dedication to the community and service to the nation. It recognizes people in all sectors of Canadian society for their varied contributions which have enriched the lives of others and made a difference to the country.

The awards ceremony will be held at Rideau Hall in Ottawa later in the year.