It's a busy time for Carl Marshall as he marks the completion of his medical degree from McMaster University's Michael G. DeGroote School of Medicine. He's in the process of preparing to move from St. Catharines to Corner Brook, N.L., where he will be based for his two-year rural family medicine residency through Memorial University. 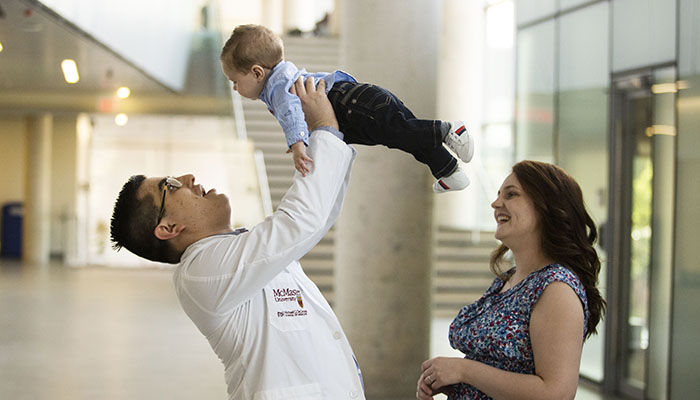 It's a busy time for Carl Marshall as he marks the completion of his medical degree from McMaster University's Michael G. DeGroote School of Medicine.

He's in the process of preparing to move from St. Catharines to Corner Brook, N.L., where he will be based for his two-year rural family medicine residency through Memorial University.

He and his partner, Timika, are also parents to a five-month-old boy named Asher.

"I've really enjoyed my time here and I look forward going home to the Maritimes to put my training to use," he said. "One of the greatest things I gained during my time at McMaster was confidence in myself, knowing that I now have the skills and abilities to be a doctor."

Raised in Nova Scotia, Marshall spent his youth in Sydney and nearby Potlotek First Nation.

His Mi'kmaw background is central to his ambition to become a family doctor.

"I knew from a young age that I wanted to be a doctor," he says. "Growing up in Nova Scotia on Cape Breton Island, there weren't enough doctors and there was always a need for them, especially on the reservations."

Marshall completed a BSc with a major in biology from Cape Breton University, then applied to various Canadian medical schools.

The Niagara Regional Campus of McMaster's Michael G. DeGroote School of Medicine was his first choice. He had heard good things about the university out in Nova Scotia, and the small-town feel of the Niagara campus appealed to him.

"I liked the idea of the three-year accelerated program and the focus on problem-based learning," he says. "As well, being used to a small town and a small university, the Niagara campus was a perfect fit for me. My classmates have grown to become close friends here and the staff is helpful. It's been great."

While Marshall and Timika have enjoyed their time in Ontario, they are excited to return to Eastern Canada. He happily notes a ferry travels between North Sydney, N.S. and Channel-Port aux Basques, N.L., making it close to home and family.

After two years of rural family medicine residency in western Newfoundland, with a possible additional year focused on Indigenous health or psychiatry, Marshall said he plans to move back to the Sydney area to serve as a family doctor and raise a family with Timika.

"My goal is to return home and work as a doctor there to help fill the need," he says. "I've always wanted to go back and work on reservations. That goal has always pushed me forward through my studies and it is why I'm here."

Marshall will be one of 28 medical students graduating from the Michael G. DeGroote School of Medicine Niagara Regional Campus on May 24, 2018.

A proud continent of family members will be celebrating with him that day, including his father, mother and stepfather, paternal grandparents, and sister. He notes his large family, especially his four additional siblings out East, is proud of his achievements.

As he looks forward to residency, Marshall's advice to the incoming class of medical students is to find a balance between school and your personal life.

"I want them to have fun with it, as it is a great experience, and to study," he said. "I learned you can do a lot of things while you are in medical school, including having a baby."