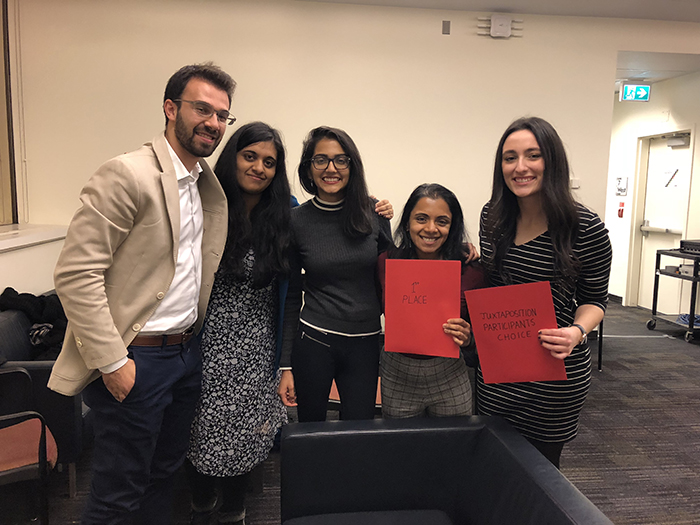 As winners, the McMaster students will present their project next month to Toronto Public Health and have their case published in the University of Toronto's global health magazine, Juxtaposition.

"I think the (program's) strong emphasis on collaborative group work provided us with the skills to work effectively as a team in a high-pressure situation with limited time," said Viscek.

The event is hosted by the University of Toronto's Dalla Lana School of Public Health and the university's global health magazine, Juxtaposition. It is open to all undergraduate and graduate students from Canadian universities and colleges.

More than 130 students on 24 teams registered to compete in this year's event. Experts in health, business and innovation served as case advisors and judges.

The issue in this year's contest was traffic-related air pollution in Toronto, which has been identified by experts as a public health issue in not only Canada's largest city, but also around the world in other major cities.

Using a budget of $5 million over three years, the task was to target the approximately 1.7 million cars – the majority being single occupancy vehicles – driven by commuters to and from work in the Greater Toronto Area.

The McMaster team applied their skills and training to develop a social enterprise business model. The result was a ride-sharing platform called Carmunity.

"Carmunity incentivizes drivers by subsidizing their gas and parking costs, which our model made possible by taking advantage of the time and cost-savings of carpooling," said Sivagnanasunderam.

The students said Carmunity would allow for the creation of mini-carpool communities throughout the GTA, with matching and points-earning features. It would also make it easier for those who may not be able to afford a car, such as recent graduates, low income families, and new immigrants.

"Our thinking was to change the culture surrounding the norm of car ownership, to reduce its necessity and increase the convenience of getting to work, while building healthier and more social communities," said Bhatnagar.