Researcher searching the world for solutions to global health problems

offman is the scientific director of the Canadian Institutes of Health Research's (CIHR's) Institute of Population and Public Health and CIHR's scientific lead for global health. This summer, he was named a full professor at York University's School of Health Policy and Management, and Osgoode Hall Law School. 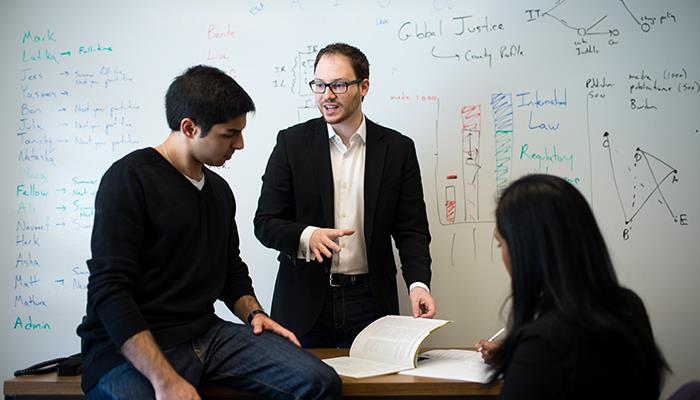 Steven Hoffman is speaking over the phone from an Uber ride in Toronto.

He has just returned from a meeting in Delhi, India, with research travel to Ottawa, Montreal, Stockholm and Copenhagen planned for the following week.

Such is the hectic life of this global health expert – a rising star in his thirties who is a product of McMaster University's Bachelor of Health Sciences program.

Hoffman is the scientific director of the Canadian Institutes of Health Research's (CIHR's) Institute of Population and Public Health and CIHR's scientific lead for global health.

This summer, he was named a full professor at York University's School of Health Policy and Management, and Osgoode Hall Law School.

"Balancing different roles takes me back to the skills I learned in the Bachelor of Health Sciences program," he says in a telephone interview during his ride.

"In the BHSc program, problem-based learning and inquiry projects demanded a high level of self-motivation and organization. Managing multiple roles is a challenge I was well trained to handle."

Raised in Toronto, Hoffman was drawn to nearby McMaster because of the reputation of the Bachelor of Health Sciences program and its focus on inquiry-based learning.

"The Bachelor of Health Sciences program allowed me to study health from an interdisciplinary perspective," says Hoffman, who graduated from the program in 2007. "It meant that I could learn about the smallest building blocks of a cell to the biggest challenges facing our society."

It was John Lavis, professor in the Department of Health Research Methods, Evidence, and Impact, and Canada Research Chair in Evidence-Informed Health Systems, who opened his eyes to research and global health.

Lavis, also director of the McMaster Health Forum, hired Hoffman as a research assistant for most of his time at McMaster. Lavis also helped facilitate an internship at the World Health Organization's headquarters in Geneva, Switzerland, for Hoffman's undergraduate thesis.

Hoffman notes Lavis was then, and continues to be, his mentor.

"The opportunity to work with John Lavis was the single most important contributor to the launch and trajectory of my research career," Hoffman says. "Early experiences working at the World Health Organization allowed me to really see how global health works (or doesn't work) and inspired much of my current research, which is focused on how international institutions can work better to advance everyone's health."

Hoffman's interest in global health motivated him to complete an MA in Political Science and a Juris Doctor from the University of Toronto, a PhD in Health Policy from Harvard University, and Doctorate in Law from Sciences Po Paris.

Before his doctoral studies, Hoffman practised at a Toronto law firm specializing in intellectual property litigation, but realized he was more interested in research related to the policies affecting health around the world.

More recently, Hoffman decided to take what he referred to as a "long shot" and applied for the CIHR opportunity. It turned out not to be a long shot and he started the role on Aug. 1, 2016.

The CIHR job sees Hoffman working with the Canadian public health research community and stakeholders to identify research priorities, develop research funding opportunities, and translate research evidence into policy and practice to improve the health of Canadians and people around the world.

As a member of CIHR's leadership team, he also participates in setting and implementing CIHR's strategic directions, particularly in global health research.

"The scientific director position is one of those roles where it requires so much of you, but provides many opportunities for making a positive difference," he says.

"Over the next few years, the CIHR Institute of Population and Public Health is going to be focused on three new areas where we think we can make a difference. These include understanding how to build healthier cities, investing in artificial intelligence for population health, and fostering evidence-informed policy, the last of which directly links to my time at McMaster."

Lavis says Hoffman was always thinking one to two years ahead even as an undergraduate student, and is now taking action to improve health in Canada and internationally with a one- to five-decade time horizon.

"Steven's Tim Hortons-inspired 'double double' approach to education – simultaneous law and international relations programs at U of T and then simultaneous PhD programs at Harvard and Sciences Po – gave him an unparalleled set of analytical skills and professional network," says Lavis.

"His research now tackles the biggest global health governance issues of our time, his teaching and mentorship roles reach a remarkably broad spectrum of lucky students, and his service roles include being by far the youngest-ever director of a CIHR institute."

Hoffman's York University appointment came on July 1, 2017, less than a year after his CIHR appointment. At York, he works closely with Dr. James Orbinski, inaugural director of the new Dahdaleh Institute for Global Health Research.

"Steven is an outstanding scholar and on matters of global health, I see him as one of the brightest strategic thinkers in world," says Orbinski, who received his MD degree from McMaster in 1990.

"He has a remarkable ability to frame problems in a way that invites genuine enquiry and illumination, and that allows insight into practical ways forward. I am thrilled to be working with him."

"It is a big opportunity to help lead a new global health research institute from the start," says Hoffman, who is also a part-time professor in McMaster's Department of Health Research Methods, Evidence, and Impact, and an adjunct faculty member with the McMaster Health Forum. "I am also excited that York will be nominating me for a Tier 1 Canada Research Chair."

As for what's next, Hoffman says he's in a good place now. He recently moved back to Toronto, purchased a house, and looks forward to settling down.

And there's always another work trip somewhere in the world just around the corner.

"Being a professor is the best job, and with my role at CIHR, it's only even better – better than I imagined for myself at this stage of my life," he says. "I am committed to working towards figuring out how we can use law, policy and regulation to help make people around the world as healthy as they can be."

This article originally appeared in the Winter 2018 edition of the Faculty of Health Sciences alumni magazine, Network. Read the full edition here.