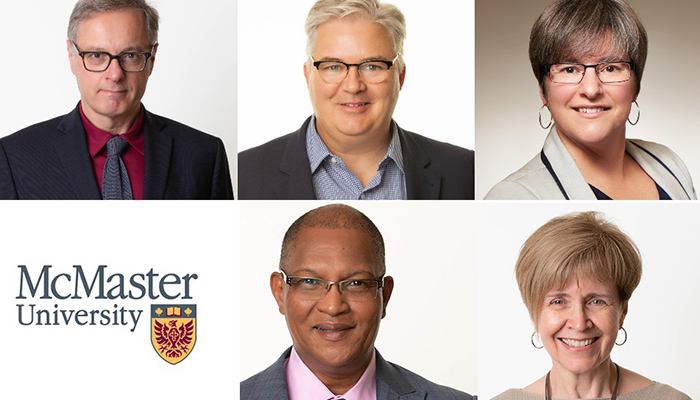 The CAHS recognizes excellence in health sciences and is considered the highest recognition of excellence in Canadian academic health sciences. The fellows are chosen for their demonstrated commitment, through their careers and lives, to their field of expertise in many ways.

Here are their CAHS citations:

“Dr. Karen Mossman’s research focuses on molecular virology and cancer immunotherapy, spanning basic science to translational investigations. She is passionate about service to science and has gained extensive experience and accolades in both administration and research, serving as associate vice president, research while leading a robust lab group that produced over 80 successful trainees. She has garnered numerous awards and invitations to speak at conferences and institutions globally and to serve on international grant panels, while committed to engaging the public on the translation of research. As a model for women in STEM, she is dedicated to building a stronger science community.”

“Philip James (P.J.) Devereaux is the pre-eminent scientist who has developed the area of modern perioperative care. He established the first international research group involving more than 30 countries and led many large trials and observational studies that have resulted in novel discoveries, which has improved care globally. Devereaux established the first Division of Perioperative Care at McMaster University, which uses reliable evidence from rigorous research, an innovative clinical fellowship training program, and a new clinical service model which systematizes care before, during, and after surgery to improve perioperative care. P.J. is an international leader in this emerging multidisciplinary field.”

“Dr. James Douketis is staff physician in general internal medicine and clinical thromboembolism at St. Joseph’s Healthcare Hamilton, and professor of medicine at McMaster University. He received his M.D. and did his residency in internal medicine at the University of Toronto followed by a thrombosis fellowship at McMaster University. Dr. Douketis’ research interests include: perioperative anticoagulant and antiplatelet management and guideline development (2008, 2012, 2019 [in preparation] ACCP Guidelines); and prevention, treatment and prognosis of patients with venous thromboembolism. Dr. Douketis is president of Thrombosis Canada, editor-in-chief of the Canadian Journal of General Internal Medicine, deputy editor of Annals of Internal Medicine ACP Journal Club, associate editor of the Journal of Thrombosis and Haemostasis and Internal and Emergency Medicine, and he has over 335 peer-reviewed publications.”

“Dr. Harriet MacMillan is a pediatrician, psychiatrist, and scientist whose research has transformed how family violence, including child maltreatment and intimate partner violence, is understood, responded to, and prevented. Her pioneering work has led to a better understanding of the impact of exposure to violence, and its link to mental health outcomes. She has influenced national and international guidelines and led the development and evaluation of prevention and intervention efforts. Dr. MacMillan has furthered our knowledge of the individual and societal impacts of child maltreatment and intimate partner violence and has worked tirelessly to improve the lives of our most vulnerable citizens.”

“Dr. Lehana Thabane is a professor in Biostatistics at McMaster University. He is a pioneer in health-research and clinical-trials methodology, celebrated as an academic mentor, and an advocate of evidence-based medicine and health care in Canada and the world. Dr. Thabane was the lead statistician on several trials that won national and international awards for their methodological rigour and impact on health policy and practice. He is dedicated to developing biostatistical expertise in the Sub-Saharan region of Africa and is distinguished by his extraordinary passion and aptitude for mentoring. Dr. Thabane’s Mentoring Without Borders approach has influenced hundreds worldwide.”

“McMaster is renowned for being among the top universities in the world for health sciences, and it is the innovation and excellence of our faculty members who put us there. I would like to congratulate these outstanding new fellows of the CAHS for their commitment to bringing about a brighter world,” he said.