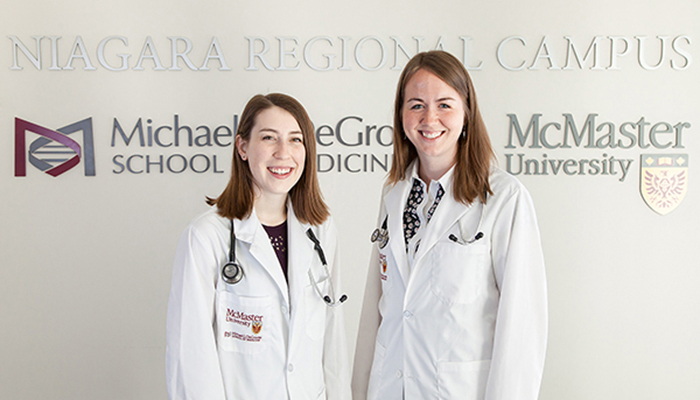 Together they developed an elective program that puts new medical students in the shoes of hospital nurses, and the successful program is being developed further than they ever imagined.

Laura Walmsley and Melanie Fortune are two of 187 new physicians graduating from the Michael G. DeGroote School of Medicine on Thursday, May 25 during the McMaster University's convocation for the Faculty of Health Sciences. A total of 52 students from midwifery, physician assistant, Bachelor of Health Sciences and several specialty diplomas and graduate degrees, will also cross the Hamilton Place stage in Hamilton at the 2:30 p.m. ceremony.

Laura was a nurse and Melanie an epidemiologist and researcher before medical school and they brainstormed together on ways to fix gaps in interprofessional education, knowing that the medical students were looking for experiential opportunities. They came up with the HEIGHTEN program, which stands for the Horizontal Elective for Interprofessional Growth and Healthcare Team ENhancement.

Two years ago, they arranged that first-year medical students could spend four-hour shifts working alongside and learning from a nurse in an in-patient medical ward at the St. Catharines hospital of the Niagara Health System (NHS).

It is often the student's first clinical experience in a hospital setting. Students have the opportunity to work alongside and partake in the daily roles and responsibilities of their nurse preceptor including patient assessments, providing personal care for patients, administering medications and giving injections, and taking part in daily interprofessional rounds.

The project has been so successful that it grew from 20 of the 28 first-year Niagara students participating the first year in 2015 to 52 this past winter, with students coming from the Hamilton and even Waterloo regional campuses of the school to participate.

"We've really had a sense of wow, to see how the project has grown and how pleased everyone is with it," said Melanie. "We're very humbled and excited for the future of multidisciplinary health care."

Laura added: "It's a unique opportunity for the students to learn what the nurses do day to day, and the nurses get an idea about where the new medical students are coming from – there's bidirectional benefit."

They presented about the program at the Canadian Conference on Medical Education recently in Winnipeg. They've arranged for members of the Class of 2018 and 2019 to take over organizing the program, which has support from the administration at both the medical school and the NHS.

Both Laura and Melanie are going into postgraduate residency programs to become rural family physicians who also provide emergency and obstetrics care.

Laura, 25, who is originally from Perth, ON, is staying at the Niagara Regional Campus, and most of her time she'll be based in Grimsby. She looks back fondly on her nursing training and a year as a critical care nurse before medical school, but found herself drawn to pursuing a path as a physician.

Melanie, 28, of Almonte, ON, is headed to the Northern Ontario School of Medicine, and she will spend most of her time in Timmins. As a public health researcher for governments, universities and non-government organizations, she had found she liked to solve complex puzzles best, but she wanted to work on the front lines of healthcare to care for people one-on-one.