A new McMaster research institute with a multidisciplinary focus offers hope for people who suffer from life-threatening allergies. 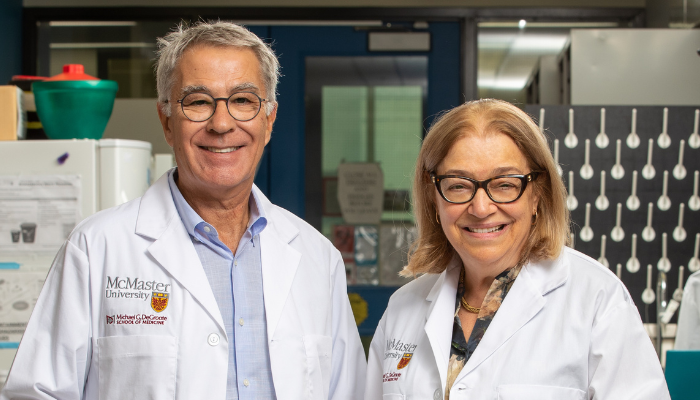 A new institute at McMaster University has brought together clinicians, scientists, and data specialists in a one-stop shop to research the causes of life-threatening allergies and develop new treatments.

The Schroeder Allergy and Immunology Research Institute (SAIRI) has been established thanks to a $10 million gift from Walter Schroeder, a McMaster MBA ’69 graduate, and his family.

The funds also established the Schroeder Chair in Allergy and Immunology Research, which is held by Susan Waserman, SAIRI’s director and a McMaster professor of medicine in clinical immunology and allergy.

“The main thrust of SAIRI is that we now have a place to merge all the ongoing allergy research and to consolidate new and existing collaborations in a centralized place,” said Waserman.

“Allergy is a disease of co-morbidities; you can have many different allergic diseases at the same time. My motivation for getting involved in allergy research comes from the patients who have been in my care; many since early childhood.

“A common theme is how allergy has greatly impacted their quality of life, affecting work, school and social activities.”

In the case of food allergy, as an example, avoidance of the culprit food and carrying an epinephrine autoinjector in case of accidental ingestion, is still the standard of care for most food-allergic individuals. The only available treatment for food allergy is oral immunotherapy, however, it is not without its challenges, Waserman said.

She added that schools, restaurants and the food industry must also grapple with food safety as increasing numbers of people develop allergies to foods that are otherwise safe for people who are non-allergic.

For allergic diseases such as hay fever, eczema and asthma, there are more effective treatments, but quality of life can still be significantly impaired.

“Allergies are part of many lives, not only the people directly affected but also those around them,” said Waserman, adding that research into allergies has been underfunded.

To change this, the new institute has two pathways: translational scientific research which takes science discoveries about allergic immunity and moves the research from the lab to the patient, which is the treatment pathway; and population research that sifts through datasets of information from large groups of people to find advances in the fight against allergies, which is the prevention pathway.

Waserman said SAIRI’s translational research branch is a “bench-to-bedside” operation with SAIRI scientists examining blood and tissue samples from people with allergies to determine the molecular mechanisms behind their condition.

“But allergies have more complex causes including both genetic vulnerability and environmental triggers,” she said.

This is where SAIRI’s second population branch prevention pathway comes in. This is built on the ongoing work of the McMaster-based CHILD Cohort Study. This birth cohort study has collected more than 52 million data points from nearly 3,500 children, beginning in 2008 to track allergy development. Funding from the Schroeder gift is supporting the use of bioinformatics to analyse the massive body of data generated by the study.

For Padmaja Subbarao, the coordinator of the population branch of the institute and director of the CHILD study, this ‘big data’ approach may hold the key to discovering new allergy treatments. The partnership will allow scientists to understand population-level trends behind allergies, to find targets for drug trials and potentially even develop new gene therapies.

Paul O’Byrne is dean and vice-president of the Faculty of Health Sciences, a respirologist and an international researcher in asthma.

He said: “The Schroeder Allergy and Immunology Research Institute will be a global hub of interdisciplinary scientific research, with the goal of realizing a world free of allergic diseases that impair millions of lives worldwide.

“There have been major advances in the treatment of some allergic diseases, but a cure remains elusive. We will plug that gap with collaborative research and state-of-the-art technologies to track allergic diseases across the lifespan, making foundational improvements for people living with these conditions.”

Jonathan Bramson, vice-dean of research for the Faculty of Health Sciences, added: “The establishment of SAIRI will allow McMaster to further its already-stellar reputation of international scientific collaboration, which is already yielding results in the fight against allergies.

“The research conducted at SAIRI will also redouble our commitment to advancing human and societal well-being, a key goal of our latest strategic plan.”

Manel Jordana, a professor of medicine and SAIRI researcher, said: “The Schroeder Institute funding launches us into the future of immunology research through the use of state-of-the-art technologies that allow us to capture millions of datapoints, opening up a completely new perspective. These analyses are impossible to do manually, they require immense computational power and knowledge, drawing on the MacData Institute’s computer scientists and mathematicians.

“These technologies give us the opportunity to generate an unparalleled understanding of the allergic process. This understanding will hopefully uncover new therapeutic targets to move into the clinic.”

SAIRI is based on campus primarily in the Michael G. DeGroote Centre for Learning and Discovery, with additional space in the Health Sciences Centre.