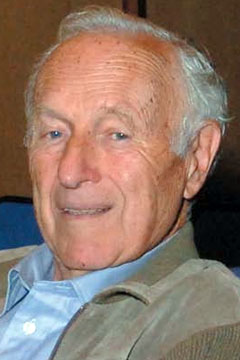 Need for a bridge and how to build it

Dr. Irwin Arias, a senior scientist at the Eunice Kennedy Shriver National Institute of Child Health and Human Development, is the director of the Demystifying Medicine course at the NIH.

"Much is known but unfortunately in different heads."

The public demands that its large investment in science will eventually result in improvements in human health. For the past half-century, advances in biology and technology have occurred logarithmically; however, their application to understanding and treating human disease has proceeded only arithmetically, creating an increasing gap. Reasons for this gap include a shortage of physician-scientists, who bring a unique perspective to their research because they have cared for patients and have a knowledge of disease; and difficulties in teaching advanced biology to physicians and pathobiology to basic scientists.

Programs that attempt to address this problem include translational medicine; bench-to-bedside research; the NIH Roadmap, which addresses roadblocks to research; the Howard Hughes Medical Institute’s (HHMI) Med into Grad initiative, which aims to help future Ph.D. biomedical researchers develop an understanding of medically relevant principles; and others. All are based on the concept that communication between basic and clinical disciplines is critical.

Many public and private initiatives seek to increase the number of physician-scientists and M.D.-Ph.D. students. But considerably less attention has been paid to the teaching aspect as a way to facilitate interactions between clinicians and physician-scientists. All programs to bridge the gap assume that if research funding is disease-related, communication between scientists and clinicians will automatically occur. Such communication is unlikely to happen unless we teach new research possibilities to clinicians and pathobiology and clinical problems to basic scientists.

For reasons that are not obvious, this changing paradigm has attracted little attention. For example, in recent national conferences on careers that linked basic science and medicine, there was no mention of opportunities for Ph.D.’s in clinical departments. And because medical school graduate program directors tend to have little experience in medicine and pathobiology, their Ph.D. students don’t get many opportunities to learn about clinical medicine. The separation between pure science and human health grows even wider. In my view, this critical gap contributes to the difficulty of linking science and medicine.

Remarkable new technologies, including genome-based personalized medicine, hold great promise for better understanding disease. It, therefore, becomes all the more important for clinicians and physician-scientists to collaborate. But first, basic scientists need to understand the clinical aspects of disease in order for such collaborations to be effective.

Considerable data support the timeliness for teaching pathobiology to Ph.D. students and fellows. Surveys reveal that most students who choose medical-school-based graduate programs over university-based ones seek research careers that will influence human health. Successful pathobiology programs ranging from Ph.D.’s in translational medicine to single courses have increased in number. For example in 2006, HHMI’s Med into Grad program awarded $10 million to 13 institutions. The program was so successful that HHMI plans to award up to $25 million to 25 institutions in 2010.

In 2000, we began a novel course at NIH entitled Demystifying Medicine to bridge the gap between advances in biology and their application to major human diseases. To accommodate the many Ph.D.’s at NIH, we instituted a format resembling old-fashioned Medical Grand Rounds in which patients were presented. From January through May, we offer weekly two-hour sessions featuring major diseases, where a live patient explains what it’s like to have the disease, a physician-investigator discusses clinical advances and challenges, and a basic scientist presents the latest research findings. Demystifying Medicine has been well received by scientists at all levels. About 800 individuals register each year, many attending in person and countless others watching sessions via live or archived videocasts. More than 24 institutions use the sessions for teaching students and fellows. Hearing from patients puts a human face on a disease and scientists as well as physicians are motivated to learn more.

Teaching pathobiology to Ph.D.s is timely, challenging, supported by outcomes data, and, for some, preparatory for academic positions in clinical departments. The goal is not to become physicians but to be able to communicate and share ideas with clinical investigators. As Tom Cech, former President of HHMI, stated: "It is self-evident that scientists working on problems which may have clinical relevance should know about the disease and how it affects people."